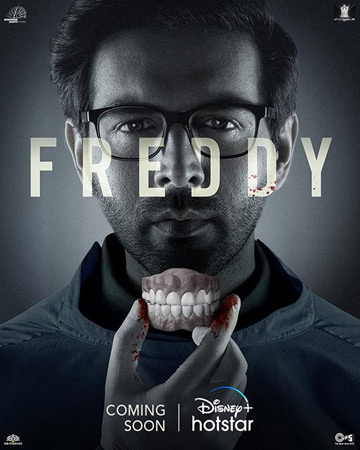 The first song from Bollywood actor Kartik Aaryan’s upcoming movie Freddy was released on Friday. Titled “Kaala Jaadu”, the song features Kartik as a mystifying dentist romancing a masked woman in a club before escorting her to his dental clinic while she is unconscious.

Aamir Khan and Juhi Chawla’s iconic knife scare moment from Ishq is also referenced in the song. Putting on his dancing shoes and getting into the tone of the song with Arijit Singh’s voice and Irshad Kamil’s lyrics, Kartik shines in addition to his intriguing role. Talking about Freddy, Kartik had said in an interview with ANI, “Freddy was a complex script and character, the prep of the role had to be done physically and mentally as well. The character helped explore a different side of my craft and encouraged me to challenge my abilities at every step as an actor. The first time I got the opportunity to explore the dark side of me. I am glad to be a part of Freddy and excited to see the audience’s reaction for the film.”

Freddy, also starring Alaya F, revolves around Freddy and Kainaaz who fall in love despite the latter being married. However, Kainaaz’s husband is abusive and Freddy discovers an unusual way to marry her which leads to twists and turns in his life. The film is all set to release on December 2 on Disney Plus Hotstar. Apart from Freddy, Kartik Aaryan has Satyaprem Ki Katha, Captain India and Shehzaada in the pipeline.