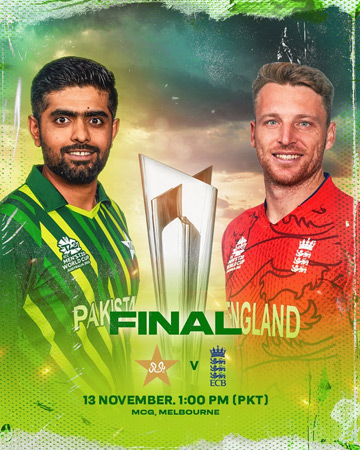 MELBOURNE: There will be some nervous looks skywards over the coming days in Melbourne with rain threatening the men’s T20 World Cup final between England and Pakistan at the MCG on Sunday, raising the prospect of the reserve day being needed and even a shared trophy. There is currently a 95% chance of rain forecast for Sunday with between 15 and 25mm falling. “Very high (near 100%) chance of showers. The chance of a thunderstorm, possibly severe, with heavy falls possible,” the Bureau of Meteorology was saying as of Friday morning. The reserve day is allocated on Monday, but that also has an uncertain forecast with again a 95% chance of rain and falls between 5 and 10mm.

For the knockout matches in the tournament a minimum of 10 overs per side is needed to constitute a match, compared to five overs during the group stages. The first priority will be to complete a shortened match on Sunday if required, meaning the overs will be reduced before the reserve day is activated. If the game has started on Sunday but can’t be completed then it will resume on the reserve day from the position it was halted. Once the toss has taken place, the game is considered live. If the game begins on Sunday and there is a reduction of overs but play does not have a chance to restart due to weather then the game will resume as a 20-over contest on the reserve day.

If there is not enough time over the two days to achieve the minimum overs the trophy would be shared. The 2002-03 Champions Trophy between India and Sri Lanka ended in such a way although under the playing conditions at the time a new game was started on the reserve day. Both matches were abandoned at virtually the same point. In the 2019 ODI World Cup, the semi-final between India and New Zealand at Old Trafford was played across two days.

Melbourne has been badly hit by rain during this tournament with three Super 12 matches abandoned without a ball bowled: New Zealand vs Afghanistan, Afghanistan vs Ireland and Australia vs England. The England-Ireland game in Melbourne was also curtailed by rain, but Ireland were able to take a famous win on DLS. Aside from the South Africa-Zimbabwe game in Hobart which was also a no result, the rest of the tournament has largely escaped the rain during what has been a wet start to summer across the east and south east of Australia. The forecast was also poor leading into the India-Pakistan game at the MCG but cleared to allow a full game with the contest developing into one of the best T20 matches of all time. Organisers, players and supporters will hope the final is graced with the same good luck.

Lost to Ireland by five runs (DLS method) at Melbourne

Beat India by 10 wickets at Adelaide

Lost to India by four wickets at Melbourne

Lost to Zimbabwe by one run at Perth

England lead 18-9. One match ended without a result

England’s big total came on the back of an unbeaten 78 from Dawid Malan and Harry Brook’s 48 not out. In reply, Pakistan folded under the bowling of Chris Woakes (3-26) and David Willey (2-22). Only three batsmen made double figures, led by Shan Masood’s 56.