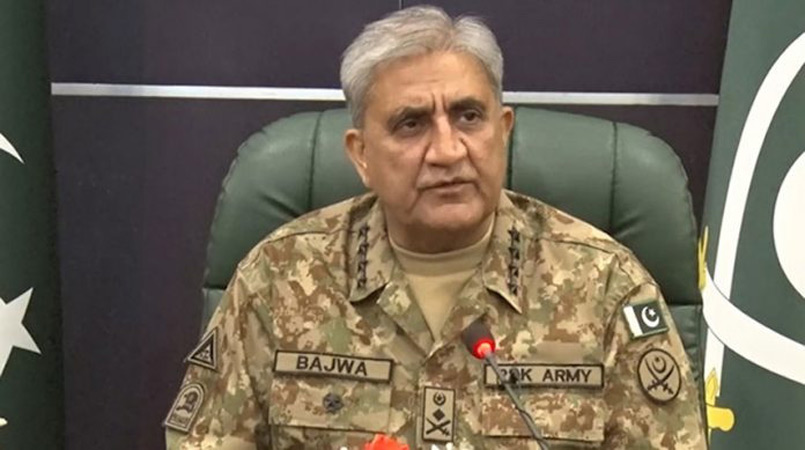 He appreciated the formations for their excellent performance during various operations, training, and natural calamities. He also advised them to keep serving the nation with zeal and commitment regardless of circumstances. Earlier this week, the COAS urged officers to stay focused on their professional duties and serve the nation, as he visited the Peshawar Corps Headquarters. The ISPR stated that the COAS was received by Peshawar Corps Commander Lieutenant General Hassan Azhar Hayat.

According to the military’s media wing, General Bajwa on the occasion laid a floral wreath at the Shuhada (martyr’s) monument. Later, while addressing the officers, the COAS appreciated the “monumental efforts of the nation’s martyrs” who he credited with achieving “peace and stability”.

“We owe it to the sacrifices of our Shuhada for providing a secure and enabling environment for socio-economic development in newly merged districts in particular and KP in general,” the COAS said, according to the ISPR press release.

“Always stay focused on your professional duties in the service of the nation,” the COAS concluded. With Thursday’s statement of farewell visits, the Army put to rest all speculations of yet another extension for the incumbent chief.

Despite the chief military spokesperson having already confirmed that General Bajwa will not be seeking another extension, speculations regarding the incumbent chief staying on were rife in recent weeks. There were rumours that General Bajwa will be given a short extension, while vice chief of army staff will be appointed. However, the ISPR’s latest statement made it abundantly clear that the incumbent COAS will formally take off his uniform on November 29. This will end his six-year tenure, during which Pakistan saw many developments, both on the internal and external fronts.

With the Army officially confirming General Bajwa’s retirement date, all eyes are now on Prime Minister Shehbaz Sharif concerning his choice of officer for the coveted slot.

It is expected that a summary carrying the names of potential candidates for the top job will likely be moved about a week before General Bajwa’s retirement. However, given past practice, the formal announcement of the new chief will likely be made closer to his retirement date.