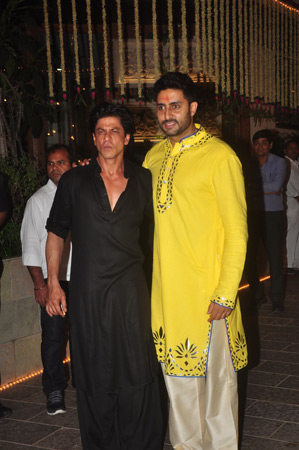 Recently, actor Abhishek Bachchan revealed that he received one of the most special career advices from the King of Bollywood Shah Rukh Khan.

During an interview with ANI, Bachchan was asked if there is any specific role that he is waiting for or wants to pursue. The actor replied saying that he is very bad at this and wants to focus on whatever he is currently doing.

While answering this question he revealed that SRK explained this concept to him in a very precise manner.

Abhishek said that I once asked the same question to Khan: “You’ve done amazing work, which one is your favourite and what all roles would you like to do.”

Shah Rukh replied: “Whatever work and roles I’m doing right now! Always remember you’re an actor. Ask yourself and introspect, if whatever you are doing right now is not your favourite, then why are you even doing it? Don’t focus on what is going to happen in future. Just focus on your present and give your 100% to it.”

As per PinkVilla, both Abhishek Bachchan and Shah Rukh Khan have been friends for a very long time; the duo has collaborated together in Karan Johar’s Kabhi Alvida Naa Kehna and Farah Khan’s Happy New Year.