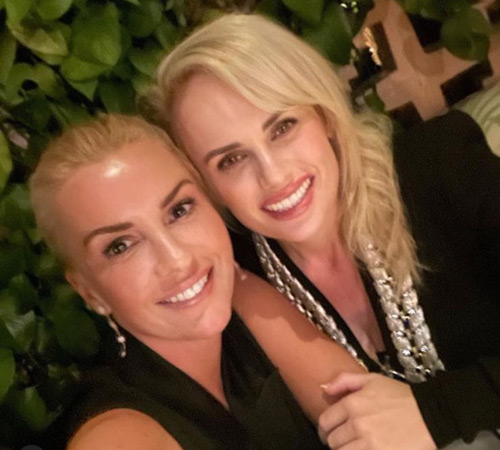 No, there has been no proposal for Rebel Wilson, despite reports. On Saturday, the Australian star denied that she got engaged to girlfriend Ramona Agruma. In an Instagram Story video of the two at Disneyland in Southern California, Rebel wrote, “Thanks for the well wishes but we are NOT engaged!”

The couple first sparked engagement speculation in October after posing with rings in an intimate Instagram photo, with the Bridesmaids actress noting in the caption that they were “focusing on all the absolutely amazing new things in our life.” On Nov. 4, multiple outlets reported that Rebel and Ramona had recently gotten engaged.

The two debuted their romance on Instagram back in June, when Rebel shared, “I thought I was searching for a Disney Prince… But maybe what I really needed all this time was a Disney Princess. #loveislove.” The Pitch Perfect actress, 42, previously explained that they were set up by a friend, sharing in a May episode of the U Up? podcast, “He’d known both of us for, at least, five years each and was like, ‘Yeah, I think you two would hit it off.’ And then we did!”

And Rebel’s co-stars definitely approve of the relationship. After she and Ramona went IG official, Pitch Perfect actress Anna Kendrick wrote, “Love you both like crazy,” while fellow cast member Elizabeth Banks added, “Congrats to both of you.”

Ramona is known for her sustainable fashion brand Lemon Ve Limon and the jewellery company DeLys. According to her LinkedIn profile, she attended the University of Latvia and speaks multiple languages. She also seems to have the travel bug, as Ramona and Rebel spent part of the summer traveling around Europe, including stops in Italy and Turkey.

“Ever wanted to sleep and have a bath in an ancient cave? Then go to @museumhotel in Cappadocia,” Rebel wrote in June. “Such a cool experience!”

Ramona echoed the sentiment the next month, commenting on a photo of the duo, “Never a dull moment with you.” That’s not all: The two have bonded over sports and music as well.

“My partner and I, like, send each other songs,” Rebel said on U Up?. “I did it actually this morning. Just one song though, not a whole playlist. Just a song that I thought would brighten their morning.”