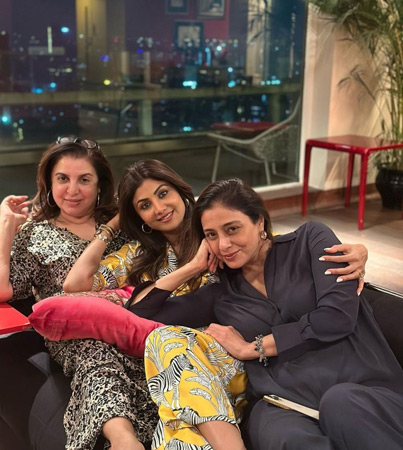 Farah revealed Shilpa had planned to celebrate Tabu’s birthday at her restaurant Bastian but they ended up doing it at Farah’s home. The three kept it simple as they slipped in comfy nightwear, had a small cake-cutting ceremony and relished an elaborate meal.

Sharing a picture of all three of them in night wear, Farah Khan wrote on Instagram, “Pyjama party.. celebrating @tabutiful s birthday dressed in formals, thank you @theshilpashetty for promising us Bastian and landing up at mine.” Shilpa responded to her in the comments section, saying, “promise will be kept so long as the after party is still at yours Farhooo. Happppyyy Burdaaayyyy Timpoooooo meri jaan.”

Farah also shared a picture on her Instagram Stories and captioned it, “Three’s company. I love a party that starts at 7 and ends by 10. Shilpa shared a video from Tabu’s cake-cutting ceremony which showed her quietly cutting the cake as Shilpa recorded the moment from a distance and Farah was away to bring tissues. As Farah went to feed cake to Tabu, the latter asked him to take a very small piece, but Shilpa screamed, “thooons de, thoons de (stuff it in).” Talking about the party, Shilpa wrote, “@tabutiful so glad we could celebrate your birthday and you. @farahkhankunder Love nights at your home, food is always served before 9 pm and kicked out before 11. Just the way I like it.”

Tabu will now be seen in Drishyam 2, alongside Ajay Devgn, Akshaye Khanna, Shriya Saran and Ishita Dutta. It will release in theatres on November 18. She also has Arjun Kapoor-starrer Kuttey and Ajay Devgn’s Bholaa. Her last outing Bhool Bhulaiyaa 2 is among the highest grossing Bollywood films this year. She had a dual role in the film and was praised for her performance.