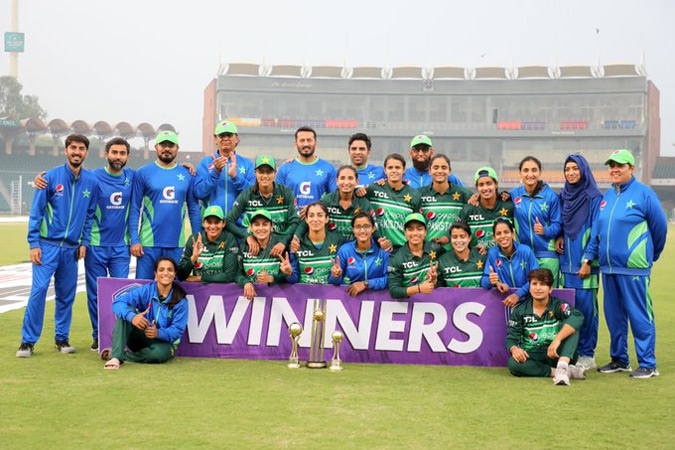 LAHORE: Ghulam Fatima’s maiden ODI five-wicket haul backed up by half-centuries from Sadaf Shamas and Bismah Maroof helped Pakistan secure a comfortable five-wicket win over Ireland and complete a 3-0 series sweep here on Wednesday. Batting first, Ireland started strongly with Leah Paul and Gaby Lewis adding 84 runs for the opening wicket. Fatima removed Lewis, but Paul recorded her third ODI fifty to keep Ireland going. She got good support from Amy Hunter with the duo adding a 65-run stand for the second wicket. It was Fatima who once again broke the stand, getting rid of Hunter, whose wicket signalled an Irish collapse. Paul fell soon after for 65 while Orla Prendergast too did not last long as Ireland slipped from 149 for 1 to 161 for 4. There was brief resistance from Eimear Richardson, but once she fell in the 44th over to Fatima, the visitors lost their way again.

They lost their last six wickets for 23 runs to be bowled out for 225 in 49.5 overs. Fatima with 5 for 34 was the star of the show with the ball. Pakistan’s chase then got off the wrong foot with both openers falling cheaply. Prendergast castled Muneeba Ali for 12 before Jane Maguire sent back the in-form Sidra Ameen for 10. However, Maroof and Shamas made sure the chase never got out of hand. Shamas, playing just her second ODI innings, recorded her maiden fifty while Maroof too chugged along. The duo added 124 runs for the third wicket in quick time before both fell in quick succession, but their stand had ensured the chase was on solid ground. While Shamas was stumped off Richardson for 72 off 80, Rachel Delaney brought about the downfall of Maroof for 57. There were no alarm bells for Pakistan though as Omaima Sohail, Aliya Riaz and Sidra Nawaz all chipped in to take their team over the line in 47.1 overs. Fatima was named Player of the Match while Ameen, having scored 277 runs in the three-match series, was named Player of the Tournament.