* Sameer Shoukat, 20, is a Baloch artist from Gaddani 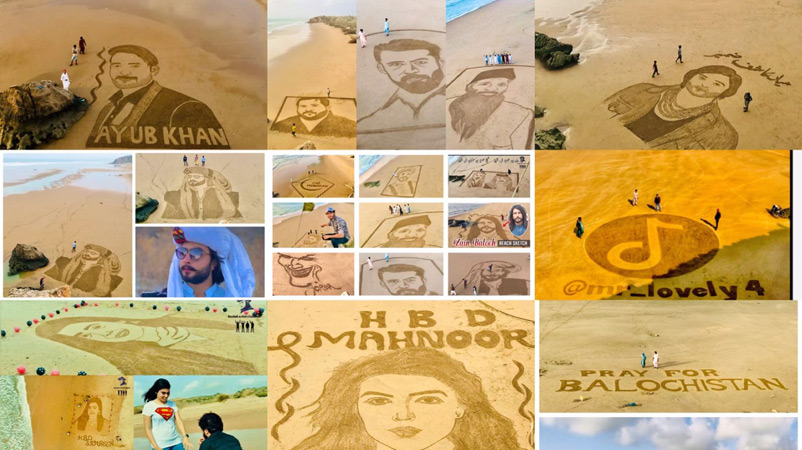 A few days ago, a young Baloch beach sketcher went viral on social media when he uploaded his beach sketch of India’s charm Virat Kohli.

Liked by plenty across the world, his drew sketch cracked the media, while he himself was lost in the dust. A news agency in India went out to report the work, while he chose silence over crediting the artist. In fact, many in social media, too, went on to sharing the art without a mention to the artist until he got a response from Shahnawaz Dahani very recently when Dahani showed the sketch to Virat Kohli in Australia. Virat thanked the team for showing their love with the regard.

Sameer Shoukat, 20, is a Baloch artist from Gaddani, Balochistan. In a competition in Gwadar in 2020, he ranked second out of 80 in the professional category. This competition boosted the young artist to go on with his passion of arts. A year after that, he went out to become a beach sketcher and has made several arts of popular figures including Lionel Messi, Babar Azam, Virat Kohli, Imran Khan, Abdul Sattar Edhi and so forth. Fearing his potentials going wasted, he joined an Arts Club in 2020, Rashidi Arts Club. And then he felt he had to turn to new heights and went on to becoming a beach sketcher in 2021.

In the given regards, I held an interview session with the young, Baloch artist.

How did you begin your journey to arts and then to sand art?

First of all, thank you for giving me your precious time. I am Sameer Shoukat from Gaddani. I am a passionately emerging artist from Balochistan. As my elder brother is the head of an arts academy, Rashidi Arts Club, I joined it in 2019 where we learned sand art. But then there was an arts competition in Gwadar where I participated in the Professional Category. Among 80, I stood second in the competition. It was the life-changing moment for me which pushed me more in the arts field. And then in the year 2021, I thought of doing something which was rare in arts. I went on with ‘Beach Sketching’. And then for last one year, I and my team have been working on this. We have sketched several beach sketches including that of former prime minister Imran Khan, Babar Azam, Abdul Sattar Edhi, Lionel Messi, Virat Kohli, Syed Zafar Abbas, Atif Aslam and we have many more in purse.

Do you sketch on order or receive any payment for your efforts?

Unfortunately, no. And fortunately, I do it because I am so eager and passionate about all these. Because I live in a coastal town and all the expenses are managed by me and my team. All the tools and systems belong to us. To a misfortune, there are plenty other tools which we lack and government has not given us the prerequisite attention that we wanted, but still we are trying out our best to continue with the few resources we have.

Is beach sketching a part of Rashidi Artists Club?

To some extent yes, but I and my team manage it by ourselves. Actually, my brother is the admin there and I have been a member of the club. In fact, Rashidi Artists Club only exists in YouTube while our group subsists in all the other social media accounts, including Twitter, Facebook and Instagram. Hence, I am doing it on myself with my team of beach sketchers. People usually misunderstand and connect it with Rashidi Artists, but it varies.

Tell us about your team and who decides the selection of your sketches such as whose sketch to be made?

In my team, we are seven admin. Although my brother is the admin, but all the things are run and managed by me here because of his other busy schedule and I deal with people with regards to the beach sketching. Coming to selection of sketches, it is a teamwork. We sit together and discuss on the names. We are six members who include Zabiullah, me, Kabeer Ahmed, Sameer Khurshid, Waheed Hanif and Waqar Noor. So you can say, it is all a teamwork here.

How is public response to your viral beach sketches?

The response has been so inspiring from the sketches’ perspective, but I feel I am lost – perhaps unintentionally. Although several media reports were made for my sketches in local, national and international media, but I was neither mentioned, nor my works were credited, neither was I interviewed by any one of the outlet. It hurts in the beginning, but then yes, I know and my team knows how hard we have worked on all these. And yes, efforts always pay back. But overall, it has been a sensational feeling to see your works are going viral.

How did you feel when Shahnawaz Dahani showed your beach sketch to Virat Kohli and tweeted the photo with Virat on Twitter? And how has been the response thereof?

It was the best feeling ever when I got a reply tweet from the Pakistani cricketer Shahnawaz Dahani sowing our sketch to Virat Kohli and posing that picture for us. The best feeling was that moment when Virat and Dahani took on to social media with my sketch for which I am wholeheartedly grateful to the both the cricketing heroes. But when it comes to public response or mention, we get disappointed. We have not received the required amount of attention that we feel we should have. I appeal to the people to kindly mention us when sharing our sketches in social media.

The young group, in their thanking response to Pakistani cricketer, drew his beach sketch and wish Pakistan a good luck for the next stages in the ongoing T20 World Cup. All they need is a gentle push and then they can move to higher level of success. Their journey towards glorifying their region and nation is en route to rise.

The writer is a freelance journalist based in Quetta. He tweets at @Alijanmaqsood12