Bruce Springsteen goes soul searching on ‘Only the Strong Survive’

* Springsteen places his voice front and center in the album, and his love for soul music is jubilant and infectious 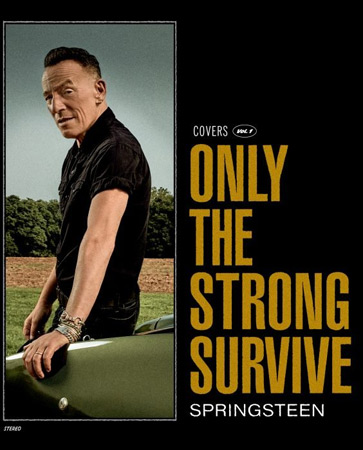 On paper, Bruce Springsteen recording an album of soul covers conjures visions of a tuxedoed Rod Stewart half-heartedly serenading suburban homemakers through in-ceiling speakers in their McMansions while preparing for their latest dinner party. That’s until you realize we’re talking about Bruce Springsteen here, and, love him or not, he never does anything half-hearted.

Like most musicians of his vintage, Springsteen grew up on AM pop radio when it was a tastemaker; when it exposed an entire generation to the Beatles, Stones, and Bob Dylan, but also the soul hits that came out of Motown, Stax, and Philadelphia International – the house built by Kenneth Gamble and Leon Huff. All that music, in addition to Phil Spector’s wall-of-sound productions, informed Springsteen’s later work with the E Street Band. Now we have Only the Strong Survive, his payment of the debt to, and celebration of, the classic soul that filled the bedrooms and imaginations of so many of us.

To be clear, the track listing of Only the Strong Survive is not, as the press materials have suggested, strictly from the golden era of soul (the 1960s and 1970s). Springsteen looks to the early and mid-‘1980s for a latter-day hit from the Four Tops (“When She Was My Girl”) and the post-Lionel Richie Commodores’ homage to departed soul legends, “Nightshift”. The most recent cover is “Soul Days”, a blast of nostalgia written by songwriter Jonnie Barnett and recorded by Dobie Gray in 2000.

“Soul Days” exemplifies Springsteen’s approach to Only the Strong Survive. It presents this music as fun, celebratory, joyous, and close to religious testimony. In other words, not unlike a Springsteen concert. One could imagine many songs performed on the Boss’s upcoming tour with the E Street Band, as he’s peppered his sets with covers of some of rock and soul’s most durable classics since the beginning. Only the Strong Survive could have easily gone the route of The Return of Bruno – Bruce Willis’ embarrassing vanity project from 1987 – with sterile, blue-eyed-soul takes of “Under the Boardwalk”, “Soul Man”, or any number of karaoke-bar staples we endure while downing pitchers of watered-down beer and jalapeño poppers. Instead, with a few exceptions, he steers clear of the overplayed and becomes the AM radio tastemaker of old, exposing a new generation – and some of his generation – to glorious discoveries such as Frank Wilson’s ebullient “Do I Love You (Indeed I Do)” and two from the legendary Stax songwriter/performer William Bell: the swaying confidence (and fantastic vocal performance) of “Any Other Way” and a powerful take on “I Forgot to Be Your Lover” with an assist by original soul man Sam Moore, of Sam & Dave fame (who also adds his inimitable joy to “Soul Days”).

Musically, this is the most joyous Springsteen has sounded on record without the E Streeters, with the possible exception of his other covers album, 2006’s We Shall Overcome: The Seeger Sessions. Producer Ron Aniello handles most all keyboards, guitars, bass, and drums throughout with help from the E Street Horns; backing vocals from Soozie Tyrell, Lisa Lowell, Michelle Moore, Curtis King Jr., Dennis Collins, and Fonzi Thornton; and full string arrangements by Rob Mathes.

The musicians lovingly recreate the sounds embedded in the memories of everyone that’s grown up with this music: The dreamlike backing vocals that help recall the narrator’s father’s words in the Jerry “Iceman” Butler classic title track; the sweeping majestic arrangement that propels David Ruffin’s “What Becomes of the Brokenhearted”; the melodrama and tension that surround the Four Tops’ “7 Rooms of Gloom”; and the tentative, yet hopeful strings that summon a future of happiness in the Supremes’ “Someday We’ll Be Together”.

The familiar framework lays bare and adds pressure on, the centerpiece of all great soul music: the lead vocal. For this, the 73-year-old Springsteen mostly delivers. His best performances here illuminate the inspirations for the songs he penned for Gary “U.S.” Bonds on his pair of early 1980s comeback albums. You can also hear the aforementioned “Any Other Way” or, especially, his take on Ben E. King’s “Don’t Play That Song” as outtakes from The River sessions or, to a lesser extent, Born in the U.S.A. B-sides.

There are moments, however, where Springsteen struggles, sounding rushed, as the song overpowers him. Such is the case on parts of Tyrone Davis’ signature “Turn Back the Hands of Time” and, especially, “I Wish It Would Rain”. Artists over the decades from the Faces to hard rockers Little Caesar have delivered powerful, yet faithful versions of this Temptations classic. Here, however, Springsteen can’t seem to find his footing and tries desperately in places to catch up with the arrangement. The too-on-the-nose rain effect at the end mimics the original but does little to rescue the track.

That said, Springsteen’s signature robust rasp is perfect for, and confidently drives these 15 tracks. As he points out in the press for the album, his vocals have always taken a backseat to his writing and arranging over the course of his career. On Only the Strong Survive, Springsteen places his voice front and center, and his love for this timeless and joyous music is jubilant and infectious. Ultimately, it should inspire his fans to seek out the originals, especially the lesser-known ones, as everything here belongs in the continuously-updated and ever-growing American Songbook, worth hearing and celebrating for the works of art they are for generations to come.