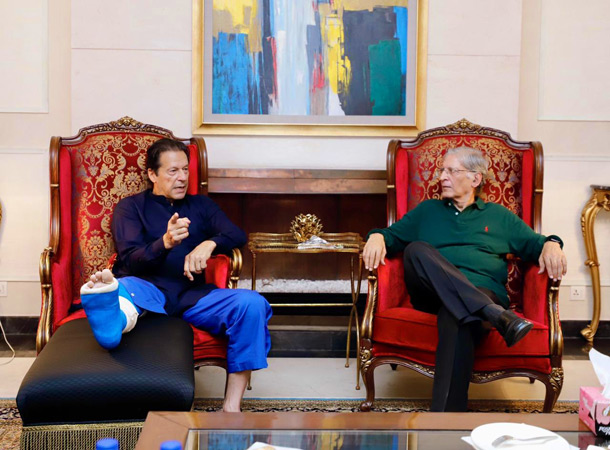 Former Prime Minister Imran Khan, who is recovering after being shot in the shin during a rally on November 3, says the tragic event has led him to carry on with more determination than ever.

“Psychologically, I’m more determined than ever,” Khan said. “I was expecting something to happen. I predicted this four months ago that there was a plot against me,” he told TRT World on Tuesday.

“On September 24, I actually went into a public rally and gave the script of what was going to happen to me,” the PTI chairman said. Khan said he had known much earlier that a successful attempt on his life would be framed as a religiously-motivated attack, and called for an investigation into the incident. “(There was) the whole sequence of events, with a video first manufactured by a certain agency, showing me as if I am committing blasphemy, which is picked up by one of the pro-government journalists and then it is run on national, government-owned television,” he said. “It was all part of a plan to make it out that eventually, some fanatic had killed me.” Imran Khan said that he will receive the forensic report of the Wazirabad attack soon in which “it will be proven that there was more than one shooter”.

He said that the man who has been arrested by the police was not a religious fanatic. “But he was a trained shooter. There was this guy who fired the first volley … then there was another volley [that] came in over our heads because we were falling,” he said. Imran Khan called on the Chief Justice of Pakistan to be “more assertive” when it comes to dispensing justice. In response to a question, he said that justice persisted when every person, even the most powerful, was brought under the rule of law. “I, as the head of a province, can’t get the three people to be investigated, imagine what will the situation be for the common man,” he said, adding that PTI’s movement for “real struggle” demanded rule of law. Imran Khan alleged that the “deep state” in Pakistan controlled everything and was stopping the Punjab police from registering a first information report (FIR) of the Wazirabad attack. “My party rules in Punjab […] I’m the ex-prime minister and the head of the largest political force in the country, yet I could not get a case registered against these three people. I know they were involved. I know that these three people will be implicated. But even then I can’t register an FIR against them,” he stated.

Imran Khan said that it was his right to have an independent investigation conducted into the Wazirabad incident. “It is my right […] they almost killed me […] it was a death trap that I survived, at least I should have the right to find out whose motive was to bump me,” he said. The former premier pointed out that despite having a government in Punjab he had been unsuccessful in registering a first information report (FIR) of the attack. “But the Punjab police refused. Who is controlling the Punjab police?” Separately, Imran Khan said that his party’s doors were open to “all democratic loving forces”. In a series of tweets, he said: “For the future of Pakistan the doors of PTI are open to all democratic loving forces to join our struggle for Justice, rule of law and freedom from foreign subservience – our goal of Haqeeqi Azadi.”

PTI chairman Imran Khan has said that his lawyers would give his position on the first information report (FIR) registered against the Wazirabad attack. He also called the first information report (FIR) registered on the Wazirabad incident “farcical”. “All my life I dreamt of seeing my country as a prospering welfare state and my struggle throughout has been to make this dream a reality for my nation.” Khan said the nation has awakened, understood, and risen in support of his message of justice, freedom, and national sovereignty. “When we are so close to our goal no fear or threat of death can stop my struggle.