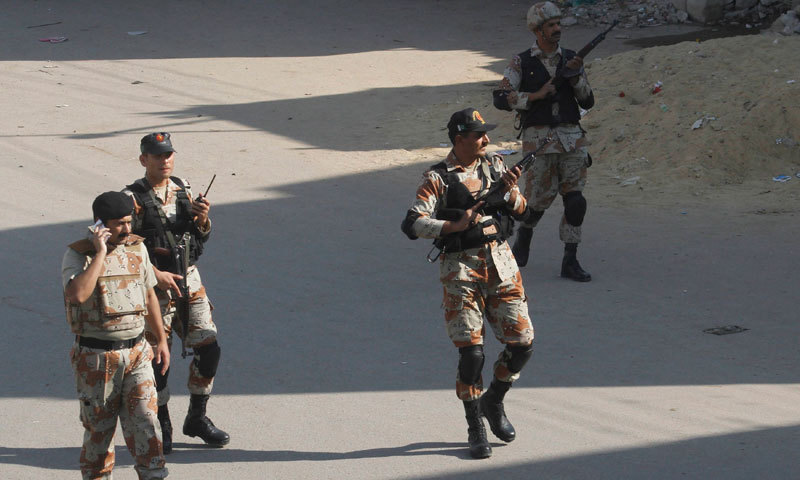 Rangers have been deployed to Punjab Governor House Lahore in response to the Pakistan Tehreek-i-Insaf worker’s daily protests there.

The Rangers took their responsibilities at the Governor House on Tuesday.

The Governor House administration wrote a letter to the Punjab government and DG Rangers requesting them to provide more police force for the security of the Punjab governor, his family and staff residing in the premises.

The letter requested Punjab to take all possible measures for stopping the mob from entering the Governor House.

An angry mob on Friday held a protest outside the Governor House. They tried to crash the front gate, burnt tyres, attempted to climb the gate and vandalized the CCTV cameras.

Yesterday, the PTI workers again staged a protest outside the Governor’s House. They were demanding the registration of an FIR of the Wazirabad shooting incident.

However, a first information report (FIR) of gun attack on former prime minister Imran Khan during PTI’s long march was registered on Monday in City Police station Wazirabad following Supreme Court’s ultimatum. The prime suspect Naveed, who was arrested from the spot, has been nominated in the case registered under various charges including terrorism, murder and attempt to murder.

The FIR will be presented before the top court today in line with the Supreme Court’s orders. The FIR has been registered on the complaint of the police and the three top officials named by Imran Khan have not been nominated in the case. However, sources within the PTI told Daily Times that another FIR of the incident is also expected in a day or two.