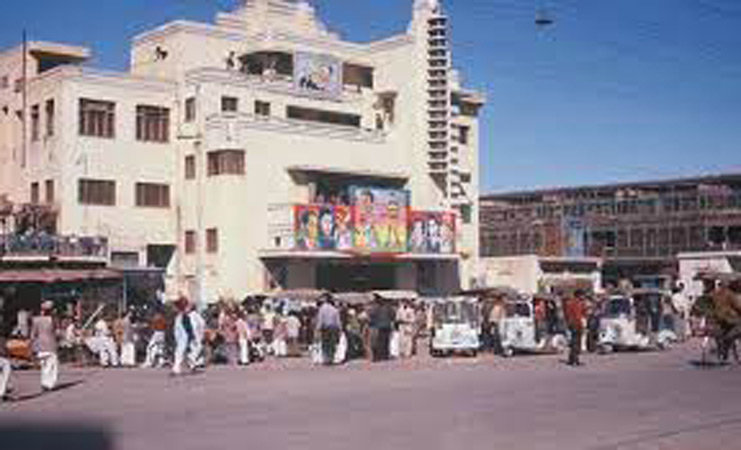 Once known as the city of cinemas and artists, Peshawar has started losing the decades-old cinema houses, which have been converted into trade and commercial plazas depriving thousands of film lovers from entertainment.

Out of 15 cinemas in Peshawar, the seven oldest cinema houses including Shabistan (Firdus), Palwasha, Capital, Falak Sair, Novelty, Metro, Sabrina and Ihsrat were demolished and converted into trade and commercial centres and hotels for monetary gains.

The remaining few cinemas in Peshawar City including Arshad Cinema, Sabreena, Aaeena, Naz and Shama also seemed mostly deserted due to the unavailability of new films, high-production film cost, pathetic seating facilities and unsatisfactory approach of the provincial government towards the film industry.

“I came to Peshawar to watch my favorite Pashto film ‘Sitamgar’ at Arshad Cinema after the closure of two cinemas including ‘Taj’ in Mardan,” said Amjad Khan (33), a Pashto film lover and resident of Babu Mohallah in Mardan City told APP.

Amjad said that he and his friends were planning to move to Rawalpindi and Lahore on weekend to watch some new movies in a relatively better cinema environment. Besides Peshawar, four cinemas in Nowshera were also closed down, he added.

Samad Khan, a resident of Barikot Swat, said that he came to Peshawar to watch his favorite Pashto movie as all the cinemas except Swat were closed, adding that there was no cinema in Charsadda district.

Gohar Khan, Manager Sabrina Cinema, informed APP that he was screening two shows a day of Pashto movie ‘Badmashi Na Manum’ at Rs. 200 per ticket only, adding that there were hardly 50 people in the cinema hall which was “highly discouraging”. The rising monthly energy bills, staff salaries and property taxes had added to the financial difficulties of cinema owners in KP, he emphasised. Gohar expressed the hope of “earning handsome profit” from a new Pashto film ‘Marg Lewantoob Ghwari, to be released on Nov 18 at Arshad Cinema, wherein noted Pasho artists Jahngir Khan and Arbaz Khan essay key roles. “Its main theme is to promote patriotism, love and discourage hate and negativity in society,” he said. Noted Pashto film director, producer and artist, Shahid Khan said that one of the reasons behind dying cinemas was the “poor storyline, outdated cinematography, wrong presentation of Pashto culture and vulgarity”.

“A quality film requires roundabout Rs 10 million investment while most of the film producers ask Rs 2 million for production of a Pashto movie that was insufficient to produce a quality Pashto movie,” he said. He said Pashto films had high-profit potential due to vast viewership in Pakistan mostly in KP, Karachi and Afghanistan. He recalled that when a Pashto film was finally released in the city in the past, thousands of film lovers with beat drums gathered outside the cinema houses and cheered for their favourite hero that was “now hardly seen today” in Peshawar. He said that “our cultural values and minimal wages” discourage new talent from joining the film industry.

Despite being worst-affected by terrorism, he said local film producers and cinema owners remained resilient and kept cinema houses functional even in the most difficult times and provide entertainment to people. He urged the KP government to support those who believed in quality work.

“We urged the government to exempt cinemas from excessive taxation and provide better wages to the artist community enabling them to produce quality films like ‘Orbal’, ‘Khana Badosh’, ‘Alzam’ and ‘Deedan’ imperative for a knowledge-based society,” he said.

Renowned psychiatrist and former principal of Khyber Medical College, Professor Dr Khalid Mufti said one of the reasons for the rising trend of intolerance and violence in the society was the dying cinema culture. Terming cinema as an effective tool for “nation-building and expanding the country’s soft image” globally, he said that quality films had the widest impact among all art forms including dramas, stage and theaters.

Ikhtair Wali Khan, PML-N KP spokesman and MPA said that the federal government had established a “Binding Film Finance Fund” at a cost of Rs 1 billion per annum to promote the film industry in Pakistan.

A medical insurance policy has been introduced for artists’ community and tax exemptions in the current budget were announced besides five-year tax holiday for filmmakers and income tax on establishment of new cinemas, production houses, film museums and tax rebate on the export of film and drama for 10 years.

Besides establishment of a national film Institute and post-film production facility, he said a “national film studio was being set up at a cost of Rs 1 billion”. He said rebates would also be given to foreign filmmakers on joint film and drama projects locally, adding the condition of shooting 70 percent of film in Pakistan would be applicable to them to promote business activities including tourism and culture.

He said an eight percent withholding tax on distributors and producers was also being abolished and there would be a five-year exemption from customs duty on import of machinery, equipment and supplies for films and dramas.

He said showbiz activities would be promoted with an exemption of five-year customs duty on the purchase of film and drama production equipment and suggested foreign exchange tours for the artists community to further polish their talent.