Kohli and Nida crowned ICC players of the month for October 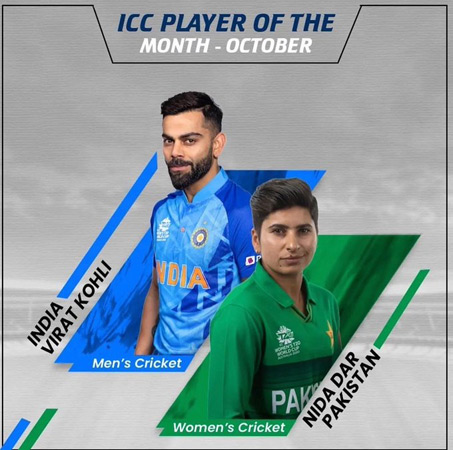 LAHORE: The International Cricket Council (ICC) on Monday announced the winners of the ICC Player of the Month awards for October 2022. Virat Kohli claimed the ICC Men’s Player of the Month following a series of star performances as India charged their way to the ICC T20 World Cup semifinals, while Pakistan’s veteran all-rounder Nida Dar is the ICC Women’s Player of the Month thanks to her sensational form in their Women’s Asia Cup campaign. Both Kohli and Nida were elected winners following a global vote conducted among media representatives, ICC Hall of Famers, former international players, and fans registered at icc-cricket.com.

Kohli celebrates his first Player of the Month prize after registering 205 runs with the bat, and showcasing the full array of his batting talent throughout October. As well as scoring a brilliant half-century against Netherlands in Sydney, he produced an unforgettable innings in the stunning victory over Pakistan in front of a capacity crowd in Melbourne to kick off their Super 12 campaign in the T20 World Cup. At one stage 31 for four, Kohli asserted his dominance on the opposition bowlers in a memorable display of controlled aggression, eventually guiding his side to chase down the 160 target on the final ball, thanks to his unbeaten 82 from 53 balls. The India talisman secures the award after being nominated for the first time, edging out a competitive field which included South Africa’s sublime finisher David Miller and the in-form Sikandar Raza of Zimbabwe, who both enjoyed key contributions at the ICC T20 World Cup in Australia.

For her key contributions to Pakistan’s semifinal surge in the Women’s Asia Cup in Bangladesh, Nida takes home the ICC Women’s Player of the Month award for October. Scoring 145 valuable runs at an average of 72.50 during the month and taking eight key wickets, the influential all-rounder underlined her importance to the Pakistan cause despite falling short in the knockout stages.

Among the highlights she enjoyed during October, Nida was sensational in the historic victory over India in Sylhet. Batting first, she arrived to the crease at 33 for three, before powering 56 not out to take them to a competitive score of 137. She then went on to star with the ball, taking the key wickets of Harmanpreet Kaur and Jemimah Rodrigues as the eventual tournament winners fell short in dramatic fashion. Nida claimed her inaugural ICC Women’s Player of the Month win by edging out Indian duo Rodrigues and Deepti Sharma, who each produced impressive displays during their winning Women’s Asia Cup triumph.

On winning the ICC Women’s Player of the Month award for October, Dar commented: “It was great to be nominated for the award, and to win it is very special to me. I wish we could have won the Women’s Asia Cup, but I am happy that we as a team are performing, and the recent series win against Ireland at home shows the commitment the girls are putting into their game. I take great pride in representing my country and my aim is to contribute in my team winning as much as I can.”