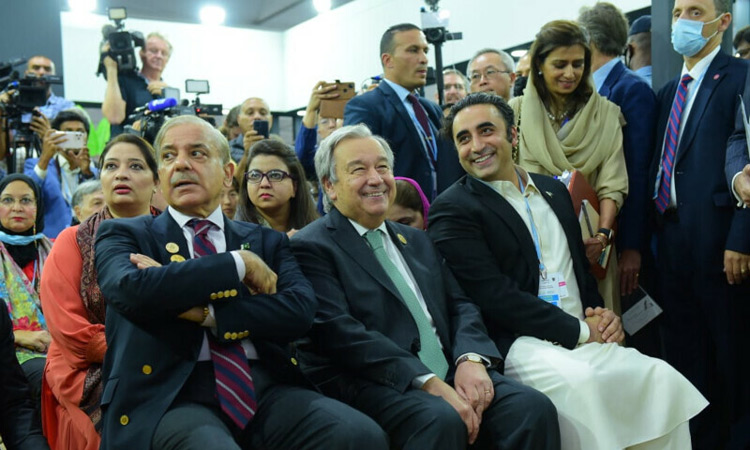 Prime Minister Shehbaz Sharif on Monday said that Pakistan would need debt relief and would seek compensation for climate damage as it recovers from catastrophic floods that cost the country some $30 billion.

Speaking at the COP27 climate conference alongside United Nations Secretary General Antonio Guterres, the premier said that Pakistan’s escalating public debt was hampering its recovery. “Millions of people are going into winter without shelter or livelihood,” PM Shehbaz said. “Women and children are still looking to us to protect their basic needs.”

“We have mobilized every available resource toward the national relief effort,” but it is not enough, PM Shehbaz said – describing hundreds of broken bridges across the country, as well as stagnant lake water now fouling Pakistan’s southern agricultural landscape.

Shehbaz told media that according to the latest estimates, Pakistan suffered losses of over $ 30 billion. He said the damages suffered in floods was also combined with a surge in poverty rates, with over 9 million of our people being pushed into a life of extreme poverty, with an additional 1.9 million families being pushed into multidimensional poverty. He said the impact on the GDP will be 2.2 % just from the flooding, but extreme climate events such as heatwaves, forest fires, and rapidly melting glaciers had already created a 9.1 percent drag on Pakistan’s GDP annually.

UN Secretary General Antonio Guterres appealed to the international financial institutions and G 20 countries to provide debt relief to Pakistan to help its post flood reconstruction and rehabilitation efforts. He proposed a debt swap, exchanging the payment of debt with investment in rehabilitation of the flood affected people of Pakistan. He said that Pakistan was a middle income country and was not given the kind of debt relief and concessional funding it needed to tackle the adverse impact of climate change.

He appealed to the international financial institutions and the G 20 countries to create a mechanism for debt relief for middle income countries including Pakistan.

He underlined the need for defining a clear road map to deal with the disaster, by creating an institutional framework of financing. Antonio Guterres said an international donor conference will be held for Pakistan, as the country needed massive support for rehabilitation of the people affected by floods. Earlier, Prime Minister Shehbaz Sharif said that according to the Post Disaster Needs Assessment (PDNA), the total estimated damage caused by the recent floods in Pakistan was over $32 billion i.e. around 10% of the country’s GDP. The enormous task of rehabilitation and reconstruction would require substantial international support for Pakistan to build back greener, based on the model of sustainable development, he added. The prime minister highlighted this as he met UN Secretary-General Antonio Guterres here on the sidelines of COP-27 Summit being held in Sharm El-Sheikh, a press release issued by the PM Media Wing said.

Appreciating the UN Secretary-General for his solidarity with, and call for massive support to Pakistan in the wake of devastating floods in the country, he reiterated that the unprecedented flood disaster in Pakistan was a clear manifestation of the challenge posed by climate change. The prime minister also endorsed the UN Secretary-General’s call for climate justice and climate solidarity. Referring to the adoption of UN General Assembly resolution, last month, expressing solidarity with Pakistan, he said that Pakistan was looking forward to convening an international ‘pledging conference’ bringing together all development partners. The prime minister also expressed appreciation for the creation of a UN inter agency team, led by the Deputy Secretary General, to help Pakistan prepare a comprehensive rehabilitation and reconstruction plan to be presented to the Conference.