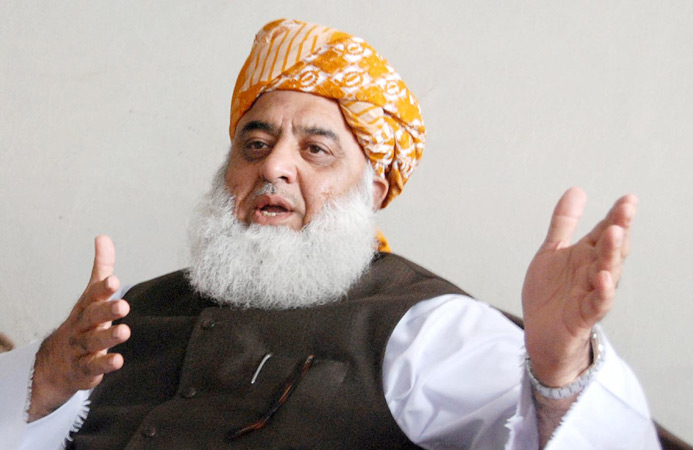 Pakistan Democratic Movement (PDM) Chief Maulana Fazl-ur-Rehman on Sunday termed Pakistan Tehreek-e-Insaf (PTI) Chairman Imran Khan’s bullet injuries in the drop-scene of Wazirabad firing incident a ‘drama’. Addressing a presser here, Maulana, who is also the chief of Jamiat Ulema-e-Islam-Fazl (JUI-F), said Imran Khan had surpassed the Bollywood’s top stars Salman Khan and Shah Rukh Khan in the field of acting. He, expressing his astonishment, said the PTI chief’s bullet injuries were being treated in a cancer hospital, adding that there were contradictions in his medical reports. “We have heard bomb fragments but heard of bullet fragments for the first time.”

He urged the federal government not to show leniency to Imran Khan as he was trying to create chaos in the country under the guise of firing accident and making false accusations against the most important personalities, including the prime minister, interior minister and an officer of the national security institution that was not acceptable at all. He asked the quarters concerned to launch a thorough probe on the matter so that Imran’s heinous face could be unmasked before the public. Regarding the PTI’s long march, Fazl said it was a complete flop show, adding that “Hakeem Sanaullah has prepared an effective tonic for the marchers and they would be treated accordingly.”

The PDM chief made it clear that nobody would be allowed to play with Pakistan at all costs. He said Pakistan was being pushed towards difficulties, which made it lag behind in the comity of nations economically. Condemning Azam Swati’s incident, he said, “We wanted peace and harmony in the country and the citizens should lead their lives as per law and the Constitution with respect and dignity.”

The JUI-F chief said in case of Arshad Sharif, the commission should also investigate the Khyber Pakhtunkhwa government that issued life threat alert to the senior journalist. He said during the PTI government, restrictions were imposed on media. He categorically stated that the decision of army chief’s appointment would be made by the prime minister in accordance with the Constitution and law as it was his discretion.