* The clicks got thousands of likes from Instagram users. Netizens showered their love toward her and the couple with their heartwarming comments 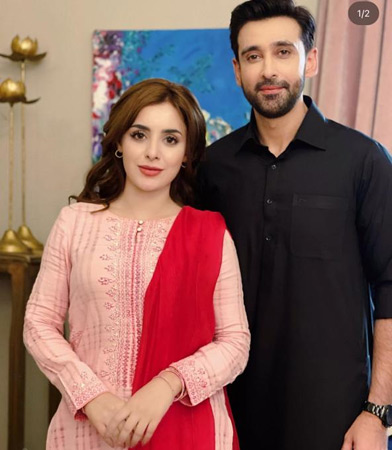 Actor Nida Khan posted pictures of herself with fellow celebrity Sami Khan from the sets of her ARY Digital series “Pyaar Deewangi Hai”.

Her viral pictures on the social media application Instagram showed the couple standing together. In the caption, the “Khoat” star called “Taqdeer” her “all-time favourite human being”.

The clicks got thousands of likes from Instagram users. Netizens showered their love toward her and the couple with their heartwarming comments.

A user said the actor is her all-time favourite person. Another stated, “love you”. Many netizens used emojis to shower their love on them.

Nida Khan has quite a fan following on social media platforms, where she posts pictures and clips of her personal and professional work for her admirers. Here are a few of them.

As far as “Pyaar Deewangi Hai” is concerned, the story continues to leave the audience intrigued by the show’s captivating storyline.

The actor is playing the pivotal role of Zeba in the ongoing superhit drama.

The serial tells the story of a girl named Rabi who has to prove her innocence in her husband Mateen’s death.

The upcoming episode of the serial, which is written by Misbah Ali Syed and directed by Aabis Raza, will show how the family will react to Rabi’s release from prison.