‘Pathaan’ teased a rip-off of ‘Captain America — The Winter Soldier’?

* It begins with a voiceover introducing 'Pathaan,' who gets caught by the enemies and tortured heavily on his last mission 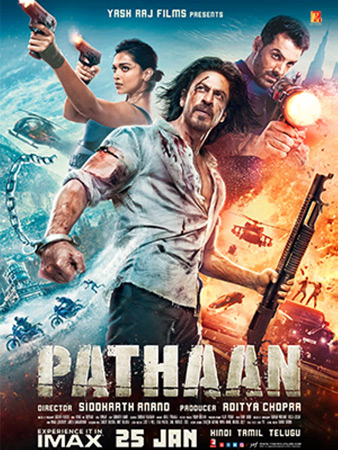 Soon after the teaser of much-awaited Shahrukh Khan flick “Pathaan” was released, movie-buffs pointed out similarities between the Yash Raj multi-starrer and a number of Hollywood films.

It is pertinent to mention the highly-awaited official teaser of Shah Rukh Khan’s “Pathaan” on November 2.

It begins with a voiceover introducing “Pathaan”, who gets caught by the enemies and tortured heavily on his last mission. The slick introduction followed an action-packed fight sequence before the audience finally caught a glimpse of Khan as he made his enemies explode with powerful kicks.

Twitter users pointed out how similar the entry of actor John Abraham in the teaser is to that of antagonist Bucky Barnes also known as The Winter Soldier.

It showed the two masked characters appear and fire a missile at a vehicle in the teaser.

Netizens hit out at the makers for their lack of originality and for using the scene from “Captain America: The Winter Soldier” to promote the flick.

The Siddharth Anand directorial will release simultaneously in Hindi, Tamil, and Telugu versions on January 25, 2023. The title will mark the grand comeback of King Khan on screen after four long years.