* Sydney is fantastically diverse, with a mighty migrant population 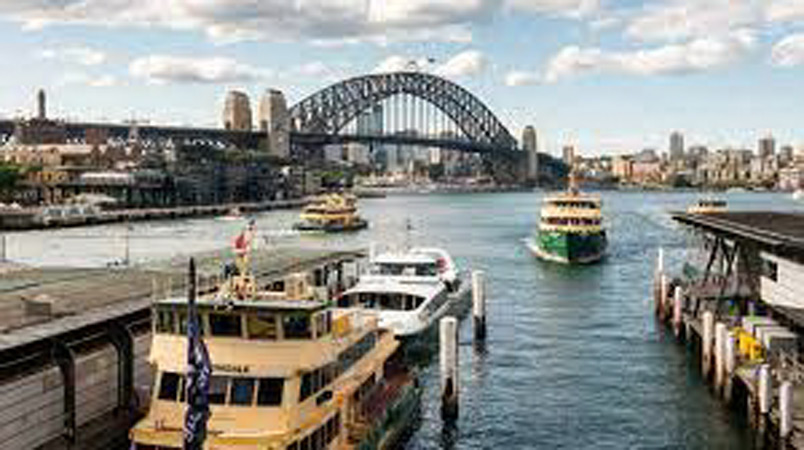 In Sydney, the intersection of city and nature is magic. A sunrise ocean swim is wholly possible before drying off and heading to the office. A stroll to a neighborhood cafe reveals a kaleidoscopic floral display: bobbing grevillea, flowering gum. But there are greater rewards beyond the obvious. Sydney is fantastically diverse, with a mighty migrant population (more than 40% of residents were born overseas). Independent arts and music punch above their weight against the odds of funding cuts and pandemic setbacks. Sydney, along with the rest of Australia, was closed to tourists for nearly two years. It’s time to get properly reacquainted.

Australia’s proximity to Asia makes Sydney a playground for lovers of Southeast Asian cuisine. Get a curry laksa, a loaded noodle soup with a spicy coconut broth (from 20 Australian dollars, or $12.60), at Ho Jiak, a Malaysian restaurant in bustling Haymarket. In nearby leafy Darlinghurst, Joe’s Table is a small operation where Joe does it all: answers the phone, cooks and serves juicy Thai fish cakes or caramelized beef rib on mismatched floral plates (17.50 to 39.50 dollars per dish). Or take a party bus through Southeast Asia: The 200-seater MuMu on central George Street is a blast of spectacle and flavor, with yuzu slushies and spicy cocktails

The reason you don’t come to Cantina OK! in Sydney’s business district before dinner is because you risk forgetting your reservation entirely. You can lose hours chatting to new friends in this small standing-room-only mezcal bar exuding a big, extroverted energy that makes you feel like you’ve walked into the party’s peak, and you’re the guest of honor. Bottles of unbranded mezcal with handwritten labels stack the walls: products of backyard operations in Mexico brought back from the owners’ frequent buying trips. It’s equal parts boisterous party and genuine education. You will wake up with a hangover and, inexplicably, a thorough working knowledge of agave harvesting and distillation methods.

The Hermitage Foreshore track takes visitors past secluded beaches, rocky outlooks and homes with back doors that open almost right onto the sand. For many locals in inner Sydney, visiting the Carriageworks Farmers Market is a popular Saturday ritual. Housed in a breezy 1800s rail yard in Eveleigh, the market is a place to meet small producers, ask for recipe tips and fill up a bag with high-quality goods. Stall holders rotate, but there are always ready-to-eat goods like pho, savory pies and crumpets with local butter and honey. Take your plate, grab a coffee and find a spot in the sun with a good view. The next-best attraction here is the dog-watching, as many shoppers bring their furry friends along.

The Indigenous Australians from the land that the European colonizers named Sydney are of the Eora Nation, which is made up of dozens of clans. One way to connect with Aboriginal knowledge and culture is by taking a guided tour. Try the Rocks Aboriginal Dreaming Tour, 90 minutes of strolling and storytelling along the harbor (59 dollars per adult), or the Aboriginal Bush Tucker Tour, which introduces visitors to native plants in the Royal Botanic Garden (30 dollars per adult). Explore contemporary Indigenous culture on your own, too: Spotify’s Blak Australia playlist is a good start for music, or tune into Koori Radio, which broadcasts from the suburb of Redfern, a historical center for the Aboriginal civil rights movement in the 1960s and ’70s.Catch a game at the Sydney Cricket Ground, be it cricket, rugby or Australian rules football. Australian rules football (also called “Aussie rules”), which dominates attention in the neighboring state of Victoria, is growing in popularity in New South Wales and now has two teams representing the state. Some have linked the sport to Aboriginal origins, and today Indigenous players represent about a tenth of the national league. Australians seem to rarely acknowledge how special the musical element of the sport is: Every game starts and ends with the teams’ theme songs, and all the players and supporters sing along (in key is optional). See the Sydney Swans and its superstar forward, Lance Franklin, who goes by Buddy, in action. It’s electric when he kicks a goal.

Sydney’s love affair with Italian runs deep. 10 William Street in Paddington is a well-loved pasta and wine bar with neighborhood charm. Hop up to the bar, or slide onto the banquette by the big window (32 to 47 dollars per main). A newcomer is Pellegrino 2000, a Rome- and Florence-inspired trattoria that meanders effortlessly from tradition; try the silky crumbed tripe or buttery prawn ravioli in wonton wrappers (32 to 46 dollars per main). Sit in the buzzing upstairs dining room, or eat in the wine cellar, where Italian bottles are dangerously within reach. Desserts are pure fun. A crème caramel comes with a small mountain of whipped banana cream, and a “limongello” is like a deliciously tart Jell-O shot, set inside real quarters of lemon rind to suck on.

Six years of lockout laws, a largely unpopular curfew designed to curb alcohol-related violence, followed by two years of pandemic restrictions hurt many of Sydney’s small bars and performance venues, which are still recovering. So support the arts. The Oxford Art Factory in Darlinghurst is a great place to catch established and emerging Australian musicians, while the Art Deco-ish Enmore Theater in Newtown, southwest of the city center, has that plus comedy. The Bearded Tit is a welcoming queer space in Redfern for all forms of experimental expression. For local theater, see what’s on at Belvoir St Theater in Surry Hills, whose stage has hosted the likes of Cate Blanchett and Geoffrey Rush. Take a dip in one of Sydney’s many ocean pools, where the seawater washes into the pool. Wylie’s Baths in Coogee (6 dollars per adult) is a tidal pool cut majestically into a natural rock shelf, while Double Bay’s Redleaf Pool, an enclosed beach with two floating pontoons, is a great place to take kids or just lounge in the sun (free). In the north, the seawater Maccallum Pool in Cremorne Point is free and has one of the best views of the city skyline, while North Sydney Olympic Pool in Milsons Point is a shimmering knockout smack under the Sydney Harbour Bridge.

While the famous Bondi to Coogee walk is an undeniable showstopper, the Hermitage Foreshore track in Sydney’s eastern suburbs is as close to a bush walk in the city as you can get. It’s a 1-mile, shaded amble past secluded beaches, rocky outlooks and homes with back doors that open almost right onto the sand. The route goes from Bayview Hill Road to Nielsen Park, but you can extend the adventure by following the coastline to Parsley Bay, a hidden paradise of park, bush land and gentle water with a kiosk selling coffee and snacks.

Famished? Atop Paramount House in Surry Hills is a rooftop oasis that happens to have one of the city’s best bakeries. A.P Bakery might evoke California with its midcentury sunshades and cactuses, but the flavors are Australia. The lineup of pastries is ever-changing, but you might find a macadamia, honey and thyme croissant, a wallaby meat pie, and if the season is right, sticky-glazed hot cross buns (6 to 13 dollars). There’s also an all-day breakfast menu (14 to 22 dollars), or you can build your own plate of eggs, cheeses, breads, sliced meats and pickles. From there, walk toward Oxford Street and follow it southeast to Paddington, popping into boutiques like In Bed for homewares and earthy bed linens and P.A.M. for maximalist streetwear with a Y2K aesthetic.

The four-story White Rabbit Gallery (free), in a back street of Chippendale, is home to one of the world’s most significant collections of 21st-century Chinese art. Judith Neilson, the gallery’s founder, has accumulated more than 3,000 pieces, of which only a fraction is displayed at a time. The works, which span digital art, video, painting, ceramics and other installations, show a gamut of feeling, including despair, humor, nostalgia and protest. There will be plenty to talk about afterward. Do it over dumplings in the gallery’s light-filled tearoom.

Hermitage Foreshore track is a scenic, 1-mile amble through secluded beaches and bushland within the city.

Ho Jiak is a Malaysian restaurant popular for its big, spicy flavors in dishes like curry laksa and char koay teow.

Cantina OK!, a tiny mezcal bar, makes you feel as if you walked into the party’s peak and you’re the guest of honor.

MuMu is a blast of Southeast Asian flavors, with yuzu slushies and spicy cocktails. 10 William Street is a popular pasta and wine bar.

Pellegrino 2000, a Rome- and Florence-inspired trattoria, has a dine-in wine cellar.

A.P Bakery has pastries with creative Australian flavors to be enjoyed at its rooftop oasis.

Park Hyatt unveils the postcard-perfect, uninterrupted Sydney vista, where it feels the Opera House is singing just for you (rooms with Opera House view from around 1,182 Australian dollars, or $744).

For a luxury hotel for a little less, the Four Seasons has harbor views (from 486 dollars).

For lovers of good food and design, try the Old Clare (from around 239 dollars), an Art Deco conversion with a sleek pub, or the Paramount House Hotel (from 250 dollars) in Surry Hills.

For budget travelers, Wake Up! Bondi Beach will get you to the surf in minutes, while Sydney Harbour YHA’s rooftop has million-dollar views of the harbor for a relative steal (from 58 dollars for a shared dorm, or 182 dollars for a double).

If you are looking for short-term rentals, the Surry Hills and Paddington neighborhoods are very walkable and close to Central Station. For a peaceful beach experience, Bronte is a dream.