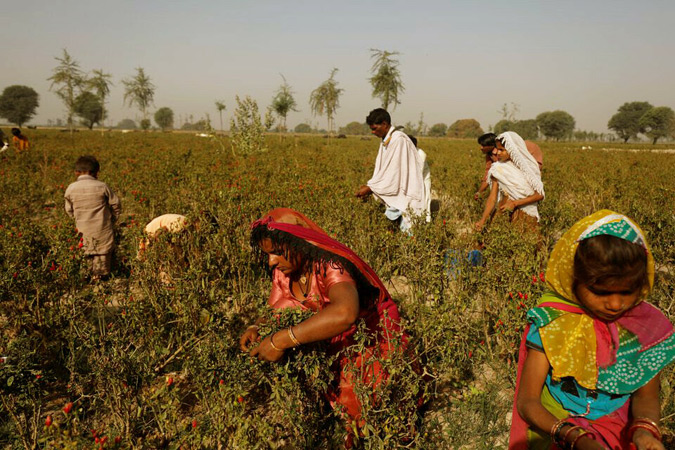 Near Kunri, a southern Pakistani town known as Asia’s chili capital, 40-year old farmer Leman Raj rustles through dried plants looking for any of the bright red chillis in his largely destroyed crop which may have survived.

“My crops suffered heavily from the heat, then the rains started, and the weather changed completely. Now, because of the heavy rains we have suffered heavy losses in our crops, and this is what has happened to the chillies,” he said, holding up desiccated, rotten plants. “All the chillies have rotted away.”

Floods that wrecked havoc across Pakistan in August and September, on the back of several years of high temperatures, have left chili farmers struggling to cope. In a country heavily dependent on agriculture, the more extreme climate conditions are hitting rural economies hard, farmers and experts say, underscoring the vulnerability of swathes of South Asia’s population to changing weather patterns. Officials have already estimated damages from the floods at over $40 billion.

Pakistan is ranked fourth in the world for chili production, with 150,000 acres (60,700 hectares) of farms producing 143,000 tonnes annually. Agriculture forms the backbone of Pakistan’s economy, leaving it vulnerable to climate change. Before the floods, hot temperatures made it harder to grow chili, which needs more moderate conditions. “When I was a child … the heat was never so intense. We used to have a plentiful crop, now it has become so hot, and the rains are so scarce that our yields have dwindled,” Raj said. Dr Attaullah Khan, director of the Arid Zone Research Centre at Pakistan’s Agricultural Research Council, told Reuters that heatwaves over the past three years had affected the growth of chili crops in the area, causing diseases that curled their leaves and stunted their growth.

Now the floods pose a whole new set of challenges.

“Coming to climate change: how do we overcome that?” he said. “Planning has to be done on a very large scale. Four waterways that used to carry (excess) water to the ocean have to be revived. For that we will have to take some very hard decisions … but we don’t have any other choice.” As flooding inundated his farm a few months ago, Kunri farmer Faisal Gill decided to sacrifice his cotton crops to try to save chili. “We constructed dikes around cotton fields and installed pumps, and dug up tranches in the chili crop to accumulate water and pump it out into the cotton crop fields, as both crops are planted side by side,” Gill said.

Destroying his cotton enabled him to save just 30% of his chili crop, he said, but that was better than nothing. In Kunri’s bustling wholesale chili market, Mirch Mandi, the effect is also being felt. Though mounds of bright red chili dot the market, traders said there is a huge drop on previous years. “Last year, at this time, there used to be around 8,000 to 10,000 bags of chillies in the market,” trader Raja Daim said. “This year, now you can see that there are barely 2,000 bags here, and it is the first day of the week. By tomorrow, and the day after, it will become even less,” he said.