Even shame is ashamed

* PTI senator bursts into tears before media, says his family had to leave country and move to a 'safe place' with traumas and scars
* 'I am asking my God, is this Pakistan where sanctity of a husband and wife is not safe?' 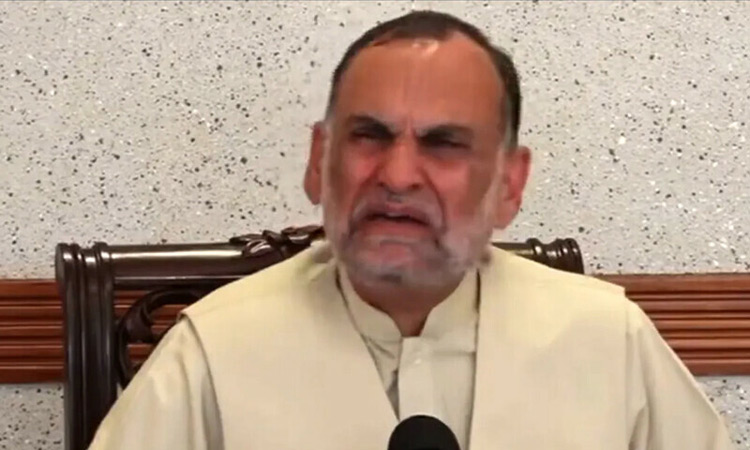 The minister said PM Shehbaz Sharif had set a new tradition by bringing an end to the bitter traditions of Imran Khan’s era.”We do not believe in what has been done by Imran Khan with Muhammad Nawaz Sharif, Maryam Nawaz and other political leaders during his four-year rule,” she remarked.

The minister said the federal government led by Muhammad Shehbaz Sharif fully believed in democratic norms and the constitutional right of freedom of expression.She said it was Imran Khan who imposed restrictions on his political opponents, leaders, activists and media during his four-year rule. “Imran Khan was free to churn out lies against his opponents,” she said.

The minister said Imran Khan’s speeches against the coalition government should reach to the public so they could know the reality of the “Fitna”.Imran Khan’s supporters, she said, would have to understand the reality of this “Fitna” and his mischief and lies.She said the current government believed in democratic norms and values, but ironically Imran Khan had a “fasicst mindset”.

Earlier, PEMRA imposed a complete ban on broadcasting live and recorded speeches of former prime minister and Pakistan Tehreek-e-Insaf (PTI) Chairman Imran Khan on all satellite TV channels. The PEMRA said that Imran during his long march speeches and a day ago had “made aspersions against the state institutions by levelling baseless allegations for orchestrating an assassination plan”. A day ago in his first press conference since the assassination attempt on him at Wazirabad, Imran doubled down on his accusations against Prime Minister Shehbaz Sharif, Interior Minister RanaSanaullah and a senior intelligence official- without giving any evidence – of hatching a plot to eliminate him, and demanded they immediately resign to ensure a fair investigation. He also asked army chief General QamarJavedBajwa to take notice of the attack and the alleged involvement of a military officer, whom he called “black sheep” in the army. He also urged Chief Justice of Pakistan Umar Ata Bandial to provide him justice.

Since he claimed a first information report of the attack was not being registered over fears of a backlash from the ‘higher powers’, Imran urged the army chief to remove spy agency officer Maj Gen Faisal Naseer and investigate him for allegedly hatching a conspiracy to kill him. PEMRA, in its notice, reproduced the above comments along with further transcriptions of Imran’s speeches or talks at different points during his long march to Islamabad.It added that airing such content was likely to create “hatred among the people” or was prejudicial to the maintenance of law and order or was likely to disturb public peace and tranquillity or endanger national security, further saying that it violated several laws and articles.

PEMRA termed Imran’s comments as “hateful, slanderous, vilifying and unwarranted statements against country’s leadership and state institutions,” adding that they were in sheer violation of various laws. The notice said that TV channels had aired Imran’s comments without any editorial oversight or time delay mechanism and thus it was prohibiting the broadcast of his speeches with immediate effect.”In case of any violation, observed licence may be suspended … without any show-cause notice in the public interest along with other enabling provisions of law,” the notice reads. Responding to the development, PTI Senator Faisal Javed said the party would challenge the ban in court and that “millions still would continue to watch Imran’s speeches on digital media.”PTI leader Fawad Chaudhry also criticised the ban as an ill-thought move and said it would be challenged.