* PTI says next phase of long march to be announced today 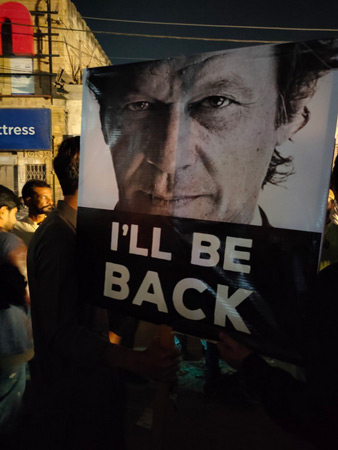 On the second consecutive day after the assassination attempt on Pakistan Tehreek-e-Insaf (PTI) Chairman Imran Khan, the PTI activists on Saturday staged countrywide protests and blocked main arteries in different parts of country.

The charged crowds including women and children chanted anti-government slogans. The related authorities deployed law enforcement agencies (LEAs) to avert any untoward incidents during the protests.

The party workers and supporters did not face any kind of resistance except in Sindh and Islamabad where PTI’s opponents are in power. Faizabad Interchange in the federal capital continued to be a battleground for the second consecutive day when the LEAs fired tear gas shells at PTI protesters after they blocked it. The demonstrators also blocked Islamabad Expressway where the police also resorted to use of tear gas shells to disperse them.

A large number of PTI supporters came out on designated sites in different cities across the country.

In Lahore, the party activists met at Liberty Chowk. In Karachi, the PTI supporters and activists gathered on Numaish Chowrangi. Heavy contingent of Karachi police accompained by water cannon was deployed in the area. In Multan, the protesters gathered in Adda Billi Wala and blocked M-4 route of motorway for an hour. Charged crowds also gathered at designated spots in Rawalpindi, Faisalabad, Sialkot, and other small cities. Long queues of vehicles were formed while the protesters also raised slogans against the government.

PTI leader Sheikh Rashid Shafiq and former provincial minister Raja Rashid Hafeez also participated in the protest in Rawalpindi. Agencies PTI Secretary-General Asad Umar said the next phase of the long march would be announced on Sunday and asked the workers to end roadblocks.