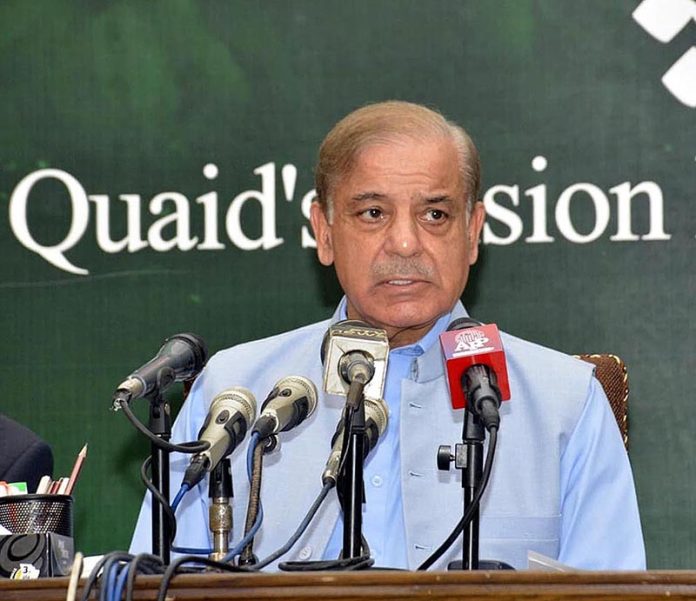 On Saturday, Prime Minister Shehbaz Sharif addressed an important press conference in Lahore. PM condemned the assassination attack on PTI Chairman Imran Khan and shared about cancelling a presser that he was supposed to address following his return from China the same day.

The prime minister extended his wishes to Imran Khan and other injured in the attack for a speedy recovery and prayed for the victim who was shot dead in the attack.

Prime Minister Shehbaz Sharif has urged Chief Justice of Pakistan Umar Ata Bandial to form a full court commission to investigate PTI chief Imran Khan’s allegation of his involvement in the attack on his container during his long march on Thursday.

“I think this is the need that this time there should be an immediate decision on the basis of justice. I request the chief justice to form a full court commission with all honorable and respectable judges for the greater interest of this country and to end this discord and chaos,” the prime minister said in a press conference in Lahore.

“I will immediately, via a letter in writing, request this and I hope this request will be supported in favour of people. And if you do not accept this request then these questions will remain forever. This fitna and sazish will be buried only when facts come to light.”

He said it was the prerogative of the government to ask the Supreme Court to form a judicial commission and he has demanded a full court commission for the reason that no body could point fingers towards it.

“The attack is condemnable, however, when the nation is being pushed towards devastation by false narratives it is my responsibility that I play a positive role to protect the people,” he said, urging the PTI chief to present evidence to support his allegations.

PM Shahbaz further said that Khan is damaging the country through his “false and cheap conspiracies”, adding that he is also building negative narratives against the institutions.

During the presser, a video was shown to the journalists which had a compilation of Khan’s clips since 2011 where he can be heard speaking about the army and military officials.

The premier said that he was aware of being questioned regarding the Model Town case.

“In the Model Town case, the trial court — during their regime — gave me and my colleagues a clean chit and the Lahore High Court also stood with the verdict.

The prime minister slammed the PTI chief for his comments against state institutions, particularly Chief of Army Staff (COAS) General Qamar Javed Bajwa and his family and lamented about enemy nations celebrating the critical situation in Pakistan.

“Unfortunately, he is trying to derail the nation. But this country of 22 million people will be protected by Allah.”