Shanaya celebrates her birthday with Navya and Ananya 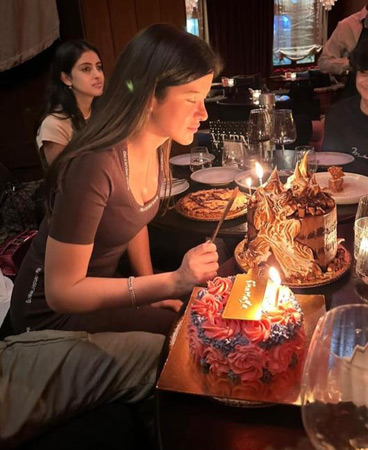 Sanjay Kapoor and Maheep Kapoor’s daughter Shanaya turned 23 on Thursday, and now the soon-to-be debutant has shared pictures from the celebrations. Shanaya took to her Instagram account to share pictures from her birthday celebrations, which were attended by her best friends Navya Naveli Nanda and Ananya Panday.

In the first picture, Shanaya can be seen cutting the cake in the presence of her family members and friends, Navya and Ananya. While sharing the post, Shanaya captioned the post, “chapter 23”.

Bollywood celebs such as Katrina Kaif, Ananya Panday and mom Maheep Kapoor reacted to the post. Ananya wrote in the comments “Chottttu”, whereas Katrina Kaif wrote “Happy Birthday’. Shanaya will be portraying Nimrit in Karan Johar’s “Bedhadak” as she prepares to make her acting debut. She will appear in the film alongside Gurfateh Pirzada and Lakshya. In March 2022, she announced the news on her Instagram handle and unveiled her first look from the film.