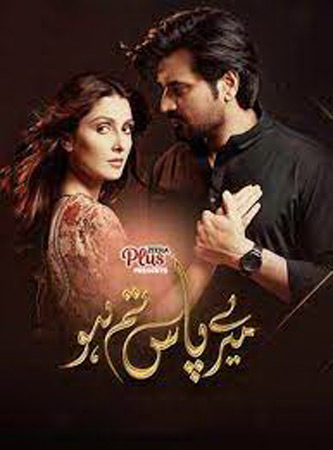 Drama “Meray Paas Tum Ho” is being converted into a book and will available for purchase by the end of this year. On Wednesday, the screenwriter Khalil ur Rehman Qamar shared the news on Twitter, posting what seemed to be the book cover. “Meray Paas Tum Ho is getting published. InshaAllah it will be available in markets by December. Get your copy booked by contacting the publisher Mr Fawad at 03004827500,” he wrote.

The cover features a combined photo of Humayun Saeed, Ayeza Khan and Adnan Siddiqui, the stars of the drama. When God favours a woman, you feel glad, but when another man does the same, you don’t, read a line over the title.

Published by Aks Publications, the book received mixed reactions. Quite a few netizens wished the author would write about topics that are more relevant to the country’s state.

Some were not okay with the way women are portrayed by Qamar. They want empowered women serving as role models instead of reading tales about “poor men”.?One Twitter user wants a USB inside the book with the OST in it – quite a tall order.

MPTH, a show so popular people thought its rating surpassed that of Game of Thrones, caused some waves when it originally aired in 2019. The story was about a woman being unfaithful to her husband. It garnered a lot of negative attention because of its misogynistic portrayal of women, there was even a legal attempt to stop the show’s final episodes from airing in January 2020 because the female petitioner deemed it too disrespectful towards women. (The Lahore Civil Court judge was quick to dismiss the petition). Around a week later, one of the leads, Saeed, was summoned by Sindh High Court over the problematic dialogues he delivered in the drama written by Qamar. Sana Saleem alleged that the script routinely spotlighted offensive dialogues about women and wanted an apology to the public for the same by MPTH’s writer, actor and producer. She also objected to the show portraying Karachi in a negative light, the infamous “do takkay ki aurat” dialogue, featuring a couple living together without a nikaah as well as a six-year-old trying to set up his father and school teacher, among other things.

Lawyers on behalf of PEMRA and ARY were also present in court. The court questioned PEMRA’s representative regarding whether they have a way of monitoring dramas through in-house censors. PEMRA’s lawyer responded that they have a separate forum to do so, keeping in mind their policy that language and visuals in dramas should be within the moral code of society.

One of the actors, Rehmat Ajmal, ended up distancing herself from the project after she heard the writer’s views on women. “I absolutely do not endorse the concepts and viewpoints of Mr Khalil Ur Rehman. I watched Khalil Ur Rehman’s interview and got to know about his problematic views on very many things WAY after the project was completed. I am not proud to be part of something that is so compromising and ill-informed,” she said.