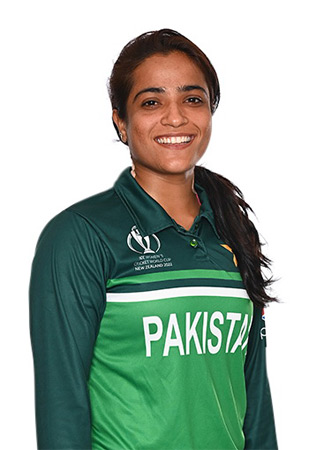 LAHORE: Pakistan continued their dominating show at home in the ICC Women’s Championship by notching up their fifth win in six games of the latest cycle. Centuries from Sidra Ameen and Muneeba Ali and a record opening stand from them saw Pakistan beat Ireland in the first women’s ODI here on Friday. The win follows their 2-1 win over Sri Lanka in June earlier this year.Ameen hit an unbeaten 176 — the highest individual score by a Pakistan batter in ODIs — after Muneeba was dismissed on 107 and the pair added 221 for the opening wicket, the highest for Pakistan. On a day records tumbled, Pakistan also notched up their first total in excess of 300 in a women’s ODI by finishing on 335 for 3. In reply, only captain Laura Delany managed a half-century for Ireland as the tourists fell short by 128 in what is their first-ever match in Pakistan.

Opting to bat in sunny conditions at the Gaddafi Stadium, where the pitch was flat, Ameen and Muneeba got off to a breezy start with the latter hogging more of the strike. Seamer Arlene Kelly’s third over, where she hit a couple of fours, got Ameen truly going. She then hit three fours in legspinner Cara Murray’s second over — beating mid-off on either side off successive deliveries before using the sweep to exploit the vacant deep backward square leg region.A 15-run over by offspinner Rachel Delaney saw both openers cross the half-century mark. Soon, left-arm spinner Leah Paul couldn’t find her footing and was carted for 33 off her two overs, with Muneeba hitting a couple of humongous sixes.

There were no signs of slowing down and soon, Muneeba would wrist Murray to the on side to bring up her maiden ODI century off 108 balls. A couple of overs later, it was Ameen’s time to celebrate as she brought up her third ton in the format — all in this calendar year. But in the interim, Muneeba had mistimed her heave to mid-on to end what was only Pakistan’s second hundred-plus opening stand – following the 158 the pair had made against Sri Lanka.

Aliya Riaz, promoted to No. 3, could not have the desired result as she crawled to a 27-ball 29, not getting the measure of the surface. But Ameen made up for it and carried her bat through to what is the highest individual score by a Pakistan batter in the format.Returning from an ankle injury that saw her miss out of the Women’s Asia Cup, fast bowler Fatima Sana then kept Ireland in a leash and had wickets of Paul and Eimear Richardson to show. Left-arm spinner Nashra Sandhu and offspinner Nida Dar then continued to apply the squeeze.The 69-run fourth-wicket partnership between Delany and Orla Prendergast was the only resistance Ireland could put up. Delany played some crisp strokes and also used the delicate dabs during her stay in the middle. However, the 336-run target was always a mountain too far.