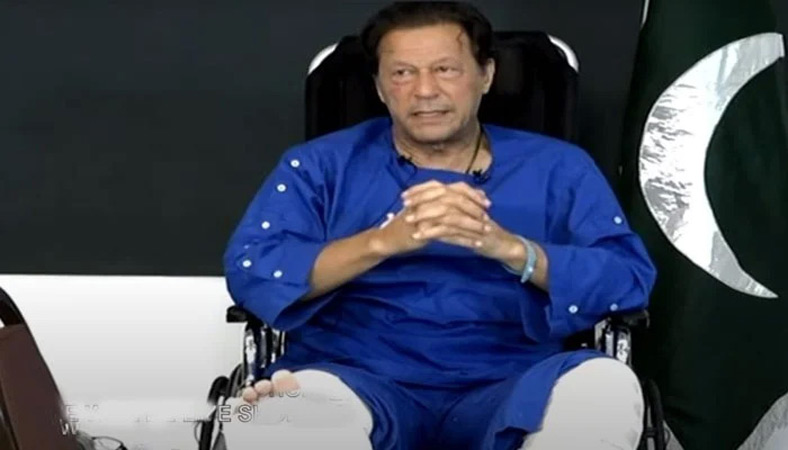 PTI Chairman Imran Khan finally decided to break his silence on Friday and said that he had learned about the looming danger beforehand.

“I had already learned that there was a plan in place to kill me somewhere between Wazirabad and Gujrat,” Khan said as he spoke during a televised address at the Shaukat Khanum Hospital in Lahore, where he is receiving treatment for his injuries.

Providing details of how “they” [government leaders and others] planned to assassinate him, Khan said, “they used similar methods they tried using against [former Punjab governor] Salmaan Taseer”. “They tried to accuse me of blasphemy to turn the public against me,” he said. “Firstly, they accused me of blasphemy […] they made tapes and released them and PMLN projected it, I knew who was doing it,” he said. “It is very easy to find out because this is a digital world. So first it was projected that I disrespected religion and then their plan was what they did in Wazirabad […] that a religious extremist killed Imran Khan,” the PTI chief claimed, adding that he had already narrated this plan to the public during a September 24 rally. “This [the attempted assassination] happened exactly according to the script.”

He reiterated his previous statement and said that four people were planning to assassinate him, so he had filmed a video to reveal the names of those people. “I have been in the government for three and a half years, I know everyone in the institutions and agencies.”

PTI chief Imran Khan demanded the resignations of the three people he has claimed are behind assassination bid on him. “A nation isn’t free until it gets justice. All the three people involved [in the attack] should resign. Otherwise, the investigation won’t be able to proceed. You all have to come out,” he added.

Former premier said that three others, separate from the ones who he had named in a tape stashed abroad, had plotted to kill him. “How did I find out? Insiders told me. The day before Wazirabad, they made the plan to kill me as they saw the number of people increasing using the script of religious extremism.” Speaking directly to Chief of Army Staff (COAS) General Qamar Javed Bajwa, PTI chief Imran Khan urged him to act against the general he named. He added that his party was giving “constructive criticism”. He stated that the nation was headed for chaos and urged the COAS to investigate him.

Imran Khan urged Chief of Army Staff (COAS) General Qamar Javed Bajwa to act now to prevent the country from heading down the path of destruction. “If you don’t take action against black sheep. the nation […] will start breaking apart,” he said, urging him to put the country first. Imran Khan claimed that if there was one party in Pakistan that could unite the country it was PTI. “If the military could unite the country then east Pakistan would not have broken away. Only political parties unite countries, the military helps.”

In an address to the nation from Shaukat Khanum hospital, he said that “we didn’t learn from history”. “When I first set out for the march, I was told that they will kill me. At first, I wondered if they would really hurt the nation for their petty interests. I ask the nation today, do we have to stay like this, or do we have to change our fate and become free? Sacrifices are needed for this.”

Imran Khan called on Chief Justice of Pakistan Umar Ata Bandial, saying that the leader of the country’s biggest party was “not getting justice”.

“CJP, whatever was done to me in the last six months, I can assure you it has never been done by the country even with an enemy. I won the highest civil awards […] I raised the respect of Pakistan in cricket […] the Shaukat Khanum hospital is internationally renowned. I made two universities. And then I created the biggest party in the country,” he said. Imran Khan said that PTI tried to register a first information report (FIR) over the assassination bid on him but contended that everyone was “afraid because many institutions are above the law”. Narrating the events of the attack on him, Imran said he would have been fatally hurt if “two heroes” were not present during the long march. “I salute martyr Muazzam […] and Ibtisam, the way he caught the attacker […] if it wasn’t for his bravery the attacker would have fired more bullets,” he said. Imran Khan described the attack on his life in Wazirabad. He said he was on the container when a “burst of bullets” was directed at him, causing him to get shot in the leg and fall down.

“Then a second burst comes, there were two people.” He said that if the two bullet sprays had been synchronized, he would not have survived. “Because I fell down, I think he [the shooter] thought I had died and fled.” He noted that one suspect, claiming to be an extremist, had been arrested. “He is not an extremist. There was a plan behind the attempt [and] we will uncover it.” Concluding his address, PTI chief Imran Khan again vowed to take to the streets once he has recovered from his injuries. “As soon as I get well, I have decided to take to the streets and will give the call for Islamabad,” he said, urging the nation to not compromise on their freedom. “An enslaved nation is not respected in the world. It can never progress.”

He called on the people to take part in his protest and to demand the resignation of the three people he held responsible for the plot to kill him.