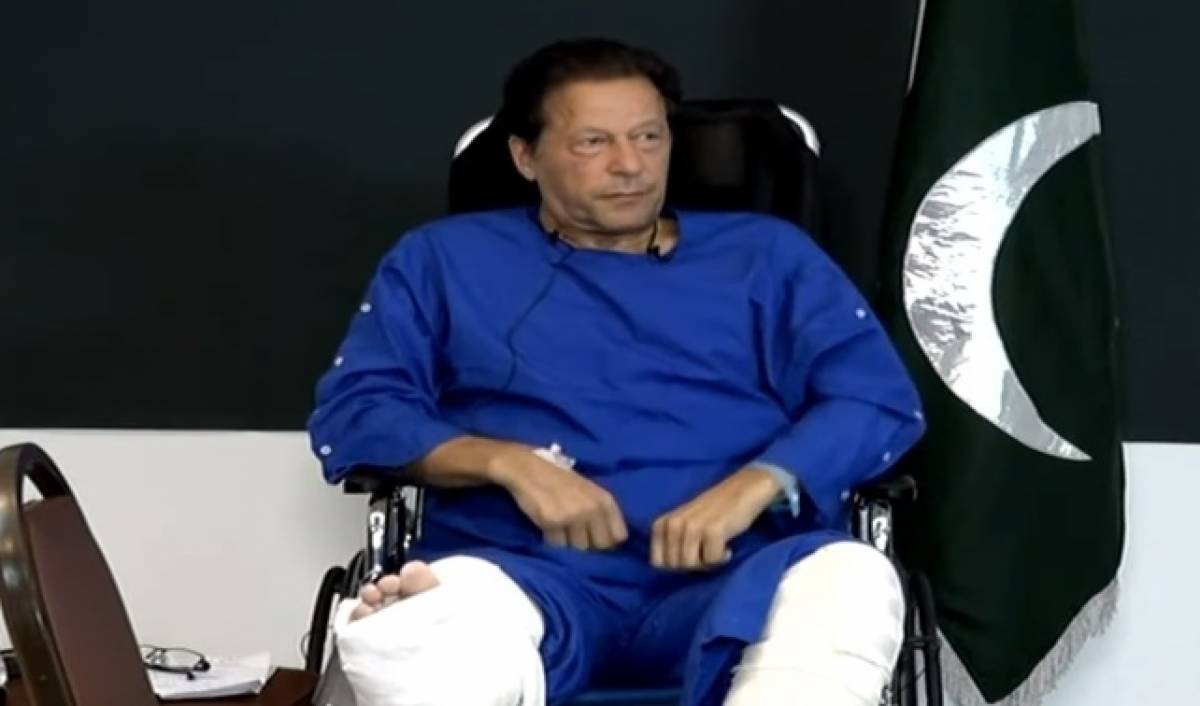 “I had already received information that a plan has been made to kill me somewhere between Wazirabad and Gujrat,” Khan said.

Imran Khan said that he received four bullets in the gun attack during PTI’s long march in Wazirabad and Dr Faisal Sultan will give a briefing about his injuries.

PTI chief Imran Khan lashed out at the PML-N and the PPP during his address. He stated that the two parties committed massive corruption and caused an increase in the country’s loans. “People voted for me because they were fed up of them [but] the establishment decides that the time has now come to change and brings them back,” he said.

He said that the establishment was used to imposing decisions on the people. “This time, they were shocked that the people did not go along with those stealing for the past 40 years.”

“Establishment was taken aback when they saw that the people this time did not support their decision to topple my government,” said former PM.

“The cipher came; Donald Lu threatened the ambassador that if Imran Khan is not removed the country will face difficulties. Then, money was used to buy the loyalties of our lawmakers.

“In the July 17 byelection, the ECP resorted to all sorts of rigging tactics,” he alleged.

“During the by-elections in July, all the state machinery was used; rigging was done, but PTI swept the elections.

Khan has alleged that the Election Commission of Pakistan (ECP) was “used” to disqualify him in the Toshakhana reference.

“ECP gave eight verdicts against us which were overturned by the courts when PTI challenged them.”

He said that when the PTI was in power, the then-opposition took out three long marches against the government but “we didn’t stop anyone.”

Imran Khan said that the opponents were expecting the end of PTI but the nation gave a strong reaction and took to the streets. “The way the people supported me, I was surprised when we announced a long march on May 25.

“They shelled families in Islamabad, they thought the party would end but they didn’t understand the [sentiments of the] nation because when decisions are made in closed rooms, you don’t know what is happening.”

Khan claimed that if there was one party in Pakistan that could unite the country it was PTI.

“If the military could unite the country then east Pakistan would not have broken away. Only political parties unite countries, the military helps.”

In an address to the nation from Shaukat Khanum hospital, he said that “we didn’t learn from history”.

Khan urged Chief of Army Staff (COAS) General Qamar Javed Bajwa to hold “black sheep” in his institution accountable. The stature of the army will not fall if you take action against them, he said.

The former PM called on Chief Justice of Pakistan Umar Ata Bandial, saying that the leader of the country’s biggest party was “not getting justice”.

Khan has said that the nation would never forget the killing of journalist Arshad Sharif.

“Journalists and his family know why he had to leave and go beyond Dubai. Everyone knows his martyrdom is the most disheartening turn in this country,” the PTI chief added.

“Four people plotted to kill me. I made a video and named those people and have stashed it abroad,” he said.

“Firstly, they accused me of blasphemy […] they made tapes and released them and PMLN projected it, I knew who was doing it.

“It is very easy to find out because this is a digital world. So first it was projected that I disrespected religion and then their plan was what they did in Wazirabad […] that a religious extremist killed Imran Khan,” Khan claimed.

“As soon as I get well, I will give the call for the Islamabad and come out onto the streets,” he said, adding that Pakistan “wasn’t made for slavery”.

He said that the nation has finally stood up and now has two paths before it: a peaceful or a bloody revolution.

“There is no third way. I have seen this nation wake up and this genie of awareness won’t go back in the bottle.