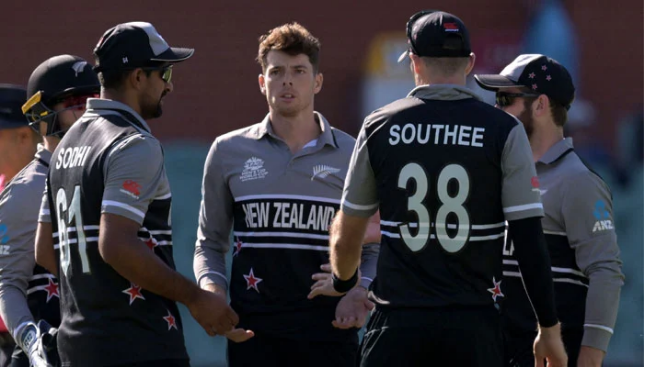 MELBOURNE: A Kane Williamson half-century and a spin bowling assault fired New Zealand to a 35-run win over Ireland at the Adelaide Oval on Friday to all but book their place in the T20 World Cup semi-finals.

New Zealand’s batsmen posted an imposing 185 for six after Ireland elected to field before the Black Caps’ bowlers restricted the Irish to 150 for nine.

New Zealand’s semi-final berth will almost certainly be confirmed later on Friday with the result of the Australia-Afghanistan match at the same venue.

Australia can join New Zealand on seven points but would need an improbable victory margin to dislodge the Black Caps from top spot by virtue of a superior net run-rate.

Ireland bow out of the World Cup but head home with pride after a solid tournament capped by a sparkling hat-trick to paceman Josh Little.

Left-armer Little had captain Williamson caught for 61, then trapped both James Neesham and Mitchell Santner lbw for no score in the 19th over to bring up Ireland’s second hat-trick in T20 internationals.

However, the damage had already been done by Williamson and middle order batsman Daryl Mitchell (31 not out).

Paul Stirling and Andy Balbirnie gave Ireland a fighting chance but left-arm spinner Santner broke the 68-run partnership when he had Balbirnie chopping onto his stumps.

Santner and legspinner Ish Sodhi then rattled through the top order, grabbing two wickets each to suck the life out of the Irish innings.

“We knew the spin would really come into the game and they bowled beautifully well,” said Williamson.