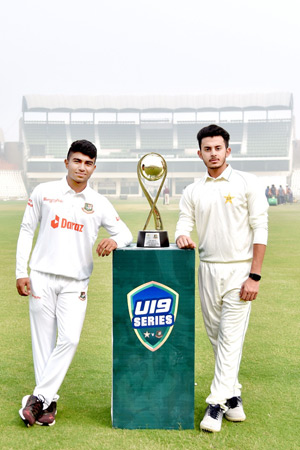 MULTAN: Pakistan future stars will be in action in the longer format from Friday as Saad Baig’s team take on Bangladesh in the solitary four-day match in the City of Saints, Multan. The match is the first in the six-match tour of Bangladesh U19 to Pakistan. The two teams also compete in three 45-over matches and two T20s over the next two weeks at the iconic Multan Cricket Stadium. The series presents a perfect opportunity to teenage cricketers from both sides to leave a mark by displaying their talent and skill in all three formats in the competitive nature of international cricket.

Bangladesh arrived in Multan on 1 November and have had two-day training. Pakistan reached the city yesterday and had an intense session on the eve of the match following a five-day camp at the National High Performance Centre in Lahore. Pakistan are led by 17-year-old talented wicketkeeper Saad Baig, who after impressive performances in the 2022-23 U19 domestic season and the Pakistan Junior League was named captain for all three formats for this series.

Speaking ahead of the four-day contest, Saad said: “It is a great honour for me to lead Pakistan. The mission is to lead by example by making the most of the opportunity at hand. “Everyone in the team is very excited for this series. Bangladesh are a good side and they are going to test us, but we have had great preparation in the pre-series camp at the NHPC under leading coaches. We will be tested in all three formats in this series, and it is great for us to get the taste of playing all three formats at the international level at this stage. We know each other well as we played against one another in the domestic competitions and recently in the Pakistan Junior League, but it is great to be together as a one team.”

Looking ahead to lead his team at the iconic Multan Cricket Stadium, Bangladesh captain Ahrar Amin said, “Our team is pretty good and we can put up a good fight against Pakistan. Our preparations for this tour began from Bangladesh and we have had some very good sessions here in Multan in the lead up to this four-day match. “We are extremely lucky to have been given this opportunity to play in Multan, which is known to be a good Test venue. Our intention from this series is to learn as much as we can. We hope that we do not return home empty hands.”