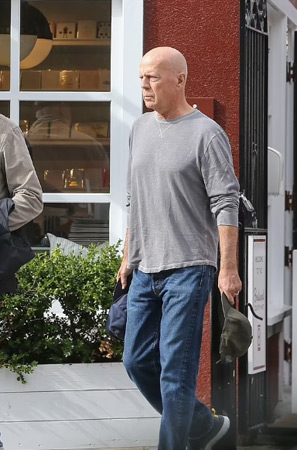 Hollywood’s legendary actor Bruce Willis stepped outside in jeans and a t-shirt after getting the VIP treatment in a Californian barbershop. The outing comes amid his health woes with aphasia. The actor cut a typically casual figure in the long-sleeved grey t-shirt and denim pants, slipping his feet into a pair of blue trainers. The 67-year-old actor held onto two baseball caps as he walked around the Brentwood area in his local town of California. The Hollywood icon withdrew from acting earlier this year after being diagnosed with the brain condition aphasia, which causes language abilities to deteriorate. His family have been open about his condition – which has meant his ability to speak and understand speech has been affected. An insider told People his family was ‘doing whatever they can’ for him and ‘have rallied around him in a big way to help Bruce cope with what is to come.’ Bruce married Emma Heming, 44, in 2009 and has welcomed two daughters with her – Mabel, 10, and Evelyn, eight. Bruce’s blended family issued a joint statement at the end of March announcing that he was ‘stepping away from the career that has meant so much to him.’