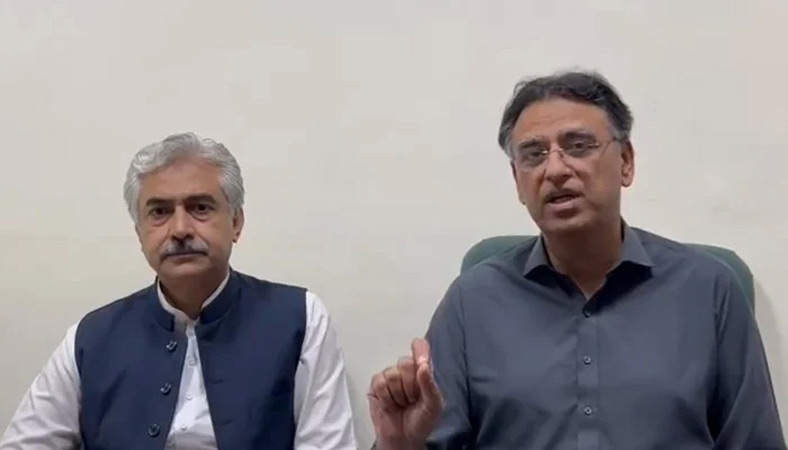 The former prime minister was injured in an assassination attack on him earlier today when a man opened fire at him. “Imran Khan has said that he had the information beforehand that these people might be involved in the assassination attempt on him,” Umar said during a video statement alongside party leader Mian Aslam Iqbal.

Umar, quoting the PTI chairman, demanded that all three people – the premier, the interior minister, and the senior military officer – “be removed from their offices.”

The PTI leader added that Khan has warned that if these officials are not removed from their officers, then the party would hold countrywide protests as Pakistan cannot run in this manner anymore. “If the demands are not met, then all the party’s workers are awaiting Khan’s call, and when he does give that call, then protests will take place across the country.”

Umar said that he spoke to the doctors – including Dr Faisal Sultan – about Khan’s situation and they have informed him that his condition is stable and out of danger. “The doctors said that bullets hit him and at this time, it is unclear as to how many they were. Three or two pellets are still lodged in his leg. The bullet also chipped his bone. The CT scan is also clear.”

“Khan is ready to sacrifice his life for the nation. There should be no doubt about it now. He is fine, but he says that we should always believe in Allah,” Umar said.

Meanwhile, the Pakistan Electronic and Media Regulatory Authority (Pemra) has prohibited news channels from airing PTI leader Asad Umar’s video wherein he has named “three suspects” former premier Imran Khan believed were behind the attack on PTI’s convoy in Wazirabad. In a notification, the watchdog said: “Broadcasting of such content is likely to create hatred among the people or is prejudicial to maintenance of law and order or is likely to disturb public peace and tranquility or endangers national security is a serious violation of Article 19 of the Constitution and Section 27 of PEMRA Ordinance 2002 as well as Electronic Media Code of Conduct 2015.”

It went on to say that investigation of the attack on the PTI chief was underway and “prior to the completion of investigation such kind of statement of a senior PTI leader circulated on social media may prejudice the investigation and inquiry at this stage”.

Subsequently, the statement added Pemra “hereby prohibits broadcast and re-broadcast of such statements being circulated on social media by PTI leaders which are unsubstantiated, vilifying, and cast aspersions against state institutions, with immediate effect”.