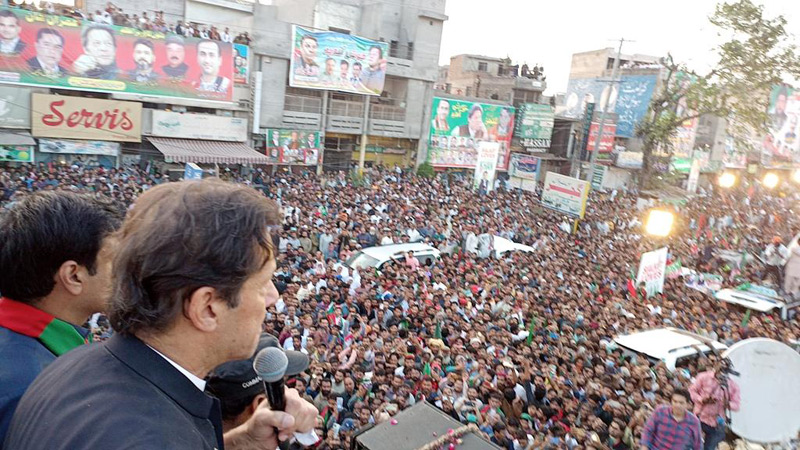 Former prime minister Imran Khan Wednesday raised six questions over certain developments leading up to his ouster and after it, including senior journalist and anchorperson Arshad Sharif’s murder.

* “Who was that person to whom US Diplomat Donald Lu conveyed the message regarding my ouster?”

* “Who threatened Arshad Sharif in Pakistan and coerced him to go into exile and subsequently asked him to leave the UAE for Kenya?

* “Who wants to bar a free media in Pakistan and also threatens the dissident journalists?”

* Who stripped naked PTI leaders Azam Swati and Shahbaz Gill and tortured them?

* “Who tells the people to stay away from PTI by resorting to telephonic threats?

* “Who imposed these thieves on us?”

Addressing the march participants, he asked if this country had been founded just for the people like Nawaz and Zardari to rule us? He continued that should Nawaz Sharif return to Pakistan, he would contest elections from the very constituency Nawaz does and beat him.

Imran Khan said that their protest will not end upon reaching the federal capital, disclosing that the protests will continue till his true demand of general elections is met. “I will protest in Islamabad for 10 months if I have to,” he said. Imran Khan said the coalition government is scared as its kanpein tang rahihain because “we have won Pakistan’s match”, adding that the authorities up there are “shivering and sweating” as the PTI march is nearing Islamabad. He further said that the PTI acquired freedom while ensuring the supremacy of law, as prosperity comes with justice. “We will never accept these thieves,” he reiterated, adding that it is better to die than to become slaves of these “thieves”.

PTI Chairman Imran Khan has said that he has “no doubt” that the turnout for the party’s long march in Islamabad and Rawalpindi will “break all records of public gatherings in Pakistan”.

Imran Khan asked the institutions that if they were neutral what was stopping them from holding “free and fair elections”. “In the press conference, it was said that we are neutral and apolitical. My question is that if you have decided to be neutral then what is stopping you from fair and free elections? Let the nation decide,” he said. He continued: “All officers investigating Shehbaz’s corruption cases died one after another. No one asked how did they died all of a sudden. […] Then Imran Raza was another officer was conducting probe, later it transpired that he also died. We cannot fix the system until the powerful are brought under the law. But there were hidden hands [helping them] and these people would not get convicted. […] We could not do anything. NAB was not in my hands. Those who were controlling NAB saved these crooks.”

Imran Khan said the country’s biggest issue is that corrupt leaders get to the top without any accountability. He commented that Singapore succeeded because they applied the system of the Holy Prophet (PBUH).

Imran Khan said that there is no progress in a society till there is justice. “Non-provision of justice is our biggest problem,” said the PTI chief. He added that Prime Minister Shehbaz Sharif was set to be sentenced in the Rs16 billion corruption case. “Fifty years ago, Pakistan was developing rapidly. Our country cannot develop unless there is justice,” said the PTI chief. He added that the accountability watchdog was never under his control when PTI was in power.

“Those who were controlling NAB saved them,” said Khan. He added that ever since the “thieves” have bene “imposed” on the country electricity prices have been skyrocketing. “The cases against him have started to end, NRO is being provided. Zardari’s cases have also started finishing,” said the PTI chief. “Yesterday they used to say they are thieves, today they say NRO has been given, they are clean,” said Khan. He claimed that the incumbent government has made corruption laws that will only convict “petty thieves”.

The former premier urged people to “stand up for their rights”, failing which they would “never get justice”.”I must say here that justice is given out only in a human society. You all have to support me. I tell you everyone that it’s better to die than becoming slaves,” he added.

He asked what led to “so much inflation in just six months”. He offered an explanation: “They got an NRO; all cases have been quashed. Maryam’s papa is getting ready to come back, Shehbaz’s cases have also been quashed. Zardari also has his cases settled.”

He said it appeared that “only small crooks will be caught and the rich will go scot-free”. They have made laws that will lead to arrest of small crooks only, he said, adding his now-familiar refrain of “we are not sheep!”He then followed up by saying previously these people would be called “criminals” but now they say “we have given them NRO”.