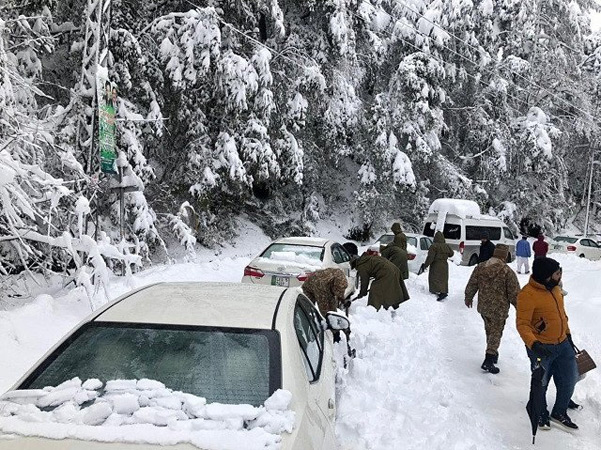 The Lahore High Court (LHC) Rawalpindi bench on Wednesday observed that the Rescue 1122, highway department and Punjab Disaster Management Authority were responsible for the Murree tragedy that claimed the lives of atleast 22 tourists.

Justice Chaudhry Abdul Aziz announced the decision reserved four months ago. The 80-page detailed decision will be released on November 7.

The LHC maintained in its decision that all illegal buildings in Murree should be demolished, and all commercial constructions banned.The court ordered that a mechanism should be drawn up for hotels, and rents should be fixed by creating categories to distinguish between hotels and guest houses in Murree.

The order stated that the Rs800,000 compensation given to the families who lost their loved ones was less, ordering for the amount to be increased.It furthered that a separate department responsible for the cleaning of sewage and drains be set up.

At least 23 people lost their lives due to a strong blizzard that swept through the hill resort on January 09, 2022.The initial investigation report that was made public pointed to the failure of relevant government departments in taking preemptive measures in light of the warnings issued by the Met Office. The probe also uncovered that measures were not taken to regulate the influx of tourists.

On May 27, the LHC had reserved its verdict in the Murree tragedy case. The high court reportedly lashed out at the Murree Development Authority (MDA) for negligence, questioning the role of the agencies when the roads of the hill station were blocked and thousands of people were stranded.

During a hearing, the lawyer said that according to the National Engineering Services Pakistan (NESPAK)Rs1.5 billion was acquired for the construction of a parking plaza in Murree.

In response, Justice Aziz criticised the concerned authorities, questioning where the allocated funds went. “When the contract for the parking plaza was confirmed and the funds allocated, it was all over. This money does not belong to the rich, it belongs to the worker.” Advocate Jalil Abbasi, the counsel for the applicants, said that the judgment was historical. “It is a heavyweight judgment announced by LHC,” he said.