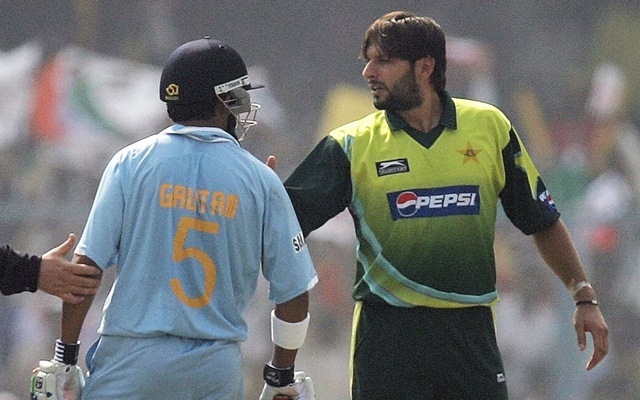 Former Pakistani master blaster Shahid Afridi has responded to former Indian opening batsman Gautam Gambhir‘s misguided criticism of Babar Azam, in which he referred to the Pakistani captain as a “selfish” player.

The former Indian opener’s comments came in response to Babar Azam’s recent dismal record, first in the Asia Cup and now in the T20 World Cup in Australia, where the top Pakistani batter has barely made it.

So far, Babar has a score of 0 versus India, 4 against Zimbabwe, and 4 against the Netherlands.

Gautam Gambhir suggested that Babar Azam should focus on the team rather than himself, referring to the prospect of demoting him to the middle order and having someone like Fakhar Zaman start the batting for the squad.

“In my opinion, you should first think about your team rather than yourself; if things don’t go as planned, you should have moved Fakhar Zaman up the batting order. This is known as selfishness, and it is simple to be selfish as a captain. It is simple for Babar and Rizwan to open Pakistan’s innings and set numerous records. If you want to be a leader, you must consider your team,” during Pakistan’s match against the Netherlands, Gambhir stated on television.

Shahid Afridi, who has nothing but love for Gambhir, responded to the statement with a funny proposal for Babar and pointed out that while players can, and should, be subjected to criticism, the criticism should be constructive and lead to the player’s improvement.

“Babar ko bole tournament k baad koshish karenge ki unke baare mein bhi kuch bole kyuki wo bhi toh ghar jayenge na. [We’ll try to persuade Babar to say anything about him throughout the competition. After all, he (Gambhir) will be returning to India as well], “Afridi stated on a Pakistani television programme.

“There will always be criticism, but you must use extreme caution when using words. You should utilize language that will serve as advice to the gamer while also making the audience understand it. In terms of Babar, he has delivered numerous match-winning efforts. Few Pakistan batters have the consistency with which he has scored. He may not have lived up to expectations, which is why he is receiving criticism.”

Afridi’s attention has switched to Wednesday’s Group 2 Super 12 match between India and Bangladesh at the Adelaide Oval. The Pakistan team and fans will be paying close attention to this game since a win for Bangladesh will keep their semi-final ambitions alive, while a loss will decrease them even further. On present form, India is the clear favorite, and Afridi believes a miracle will be required for Bangladesh to defeat the mighty Indian team.

“Because of the nature of the T20 game, any team can upset any other side. On paper, the Indian team appears to be quite large and experienced. They have some truly outstanding individual performers, although Bangladesh is no longer the same team it once was. They were supposed to perform well, but from what I’ve seen of Shakib’s captaincy, he hasn’t delivered. On current form, India is clearly ranked first,” the ex-all-rounder stated.