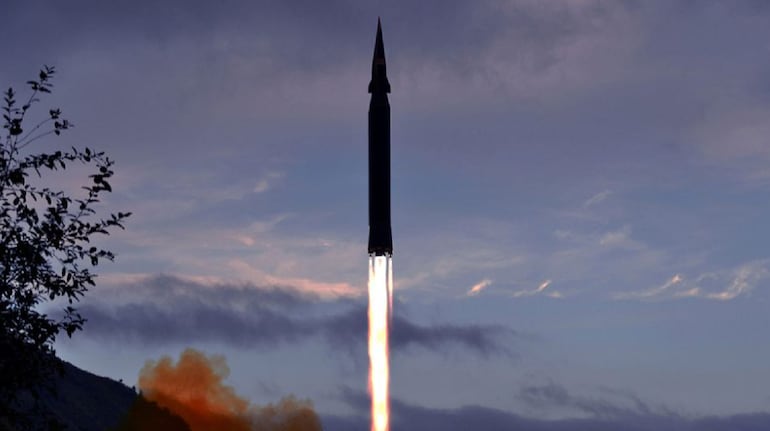 More than ten missiles were fired by North Korea on Wednesday, including one that President Yoon Suk-yeol described as “essentially a territorial invasion” when it fell not far from South Korean waters.

Ulleungdo received an air attack warning that was broadcast on national television and instructed citizens to “evacuate to the nearest underground bunker.”

The Northern Limit Line, the de facto maritime border between the two nations, was breached by one short-range ballistic missile, prompting an unusual warning for Ulleungdo people to take refuge in bunkers.

When hostilities in the Korean War came to an end in 1953, the military claimed it was the “first time since the peninsula was divided” that a North Korean missile had come thus near to the South’s territorial waters.

His office released a statement saying that Yoon “pointed out today that North Korea’s provocation is an effective territorial invasion by a missile that breached the Northern Limit Line for the first time since the separation.”

According to the military, the missile that flew closest to South Korea fell barely 57 kilometers (35 miles) east of the country’s mainland.

In a statement, the military called the missile launch that occurred close to South Korean territorial seas “extremely uncommon and intolerable.”

The statement continued, “Our military committed to responding decisively to this (provocation).”

The Joint Chiefs of Staff of the South Korean military first claimed to have discovered the launch of three short-range ballistic missiles.

Later, however, it was revealed that North Korea had launched “at least 10 missiles of various sorts today toward the east and west.”

A meeting of the National Security Council was held by Yoon Suk-yeol in response to the launches, and he demanded “rapid and stern measures so that North Korea’s provocations pay a clear price.”

The most recent launch from Pyongyang occurs as hundreds of warplanes from both sides participate in the largest-ever joint air drills between Seoul and Washington, known as “Vigilant Storm.”

According to a report in state media on Wednesday, Pak Jong Chon, a high-ranking official in North Korea, called the drills aggressive and provocative.

The name of the training exercises, according to Pak, is a reference to Operation Desert Storm, the US-led military offensive against Iraq in 1990–1991 after it occupied Kuwait.

“The special means of the DPRK’s military forces will carry out its strategic objective without delay,” he stated, “if the US and South Korea attempt to employ armed forces against the (Democratic People’s Republic of Korea) without any fear.”

The worst price in history will be paid by the US and South Korea in a horrific case.

According to the military, one of the missiles on Wednesday touched down barely 57 kilometers (35 miles) east of the South Korean mainland.

Cheong Seong-chang, a researcher at the Sejong Institute, told AFP that Pyongyang appeared to have mounted the most aggressive and threatening armed demonstration against the South since 2010, in protest of the joint US-South Korea practice.

A North Korean submarine torpedoed the South Korean naval ship Cheonan in March 2010, killing 46 servicemen, including 16 who were doing their conscription.

Two marines—both teenage conscripts—were killed when the North shelled a South Korean border island in November of that same year.

He continued, “It is currently a hazardous and unstable position that may result in military clashes.”

The launch spree that included what Pyongyang claimed were tactical nuclear drills was recently followed by the test, which Washington and Seoul have repeatedly warned may lead to Pyongyang’s seventh nuclear test.

According to Park Won-gon, a professor at Ewha University, “As far as I can recall, North Korea has never made such a provocation when South Korea and the US were doing their joint drills.”

“It appears that Pyongyang has finished building its most potent deterrent. This poses a very real hazard. Additionally, the North appears to be confident in their nuclear power.”