‘DDLJ’ to re-release in theatres today 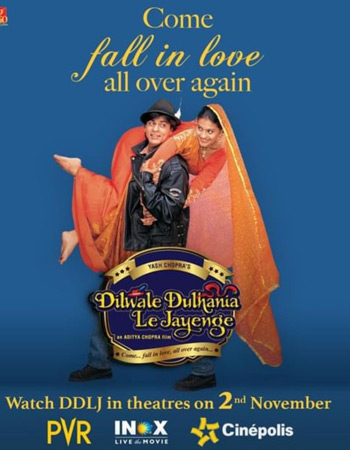 Actor Shah Rukh Khan will be turning 57-years old tomorrow and so the makers of his most-loved film Dilwale Dulhania Le Jayenge have decided to release the film once again in the theatres as a tribute to the superstar. Yash Raj Films announced the news on October 31st through their Instagram handle. They shared the poster of the film in order to announce the news.

The caption on the post read: “Our favourite love story is coming back to the silver screen. Watch Dilwale Dulhania Le Jayenge on 2nd November, 2022 only in Indian Theatres @pvrcinemas_official @inoxmovies @cinepolisindia @iamsrk @kajol #AdityaChopra.”

DDLJ is a romantic-drama movie written and directed by Aditya Chopra. The film was released back in 1995 and became a massive blockbuster. It stars Shah Rukh and Kajol in the lead roles. The story of the film revolved around Raj and Simran’s love story.

The blockbuster film also starred late Amrish Puri, Farida Jalal and Anupam Kher in vital roles. The music in the film has been given by Jatin-Lalit. The famous songs of DDLJ are Tujhe Dekha To and Zara Sa Jhoom Loon Mein, reported IndiaToday.