* PTI chief dares Nawaz Sharif to come back, contest polls against him
* If CJP and judiciary don't stand for us, then who will
* Nation won't bow down in front of anyone nor will be scared of anyone 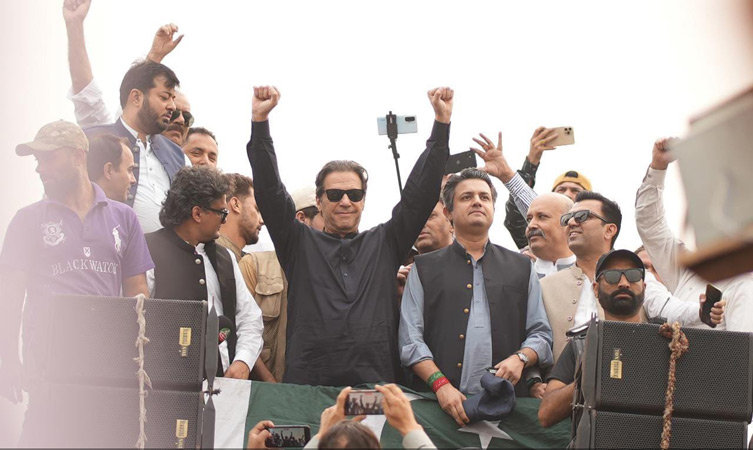 “Nawaz Sharif, whenever you come back and contest elections, I challenge you, I will go to your constituency and defeat you,” Imran Khan said while addressing supporters in Gujranwala. He also alleged that the former prime ministerNawaz Sharif and PPP Co-chairperson Asif Ali Zardari were trying to make the establishment stand against PTI.

Addressing the participants, the PTI chief claimed that Nawaz Sharif would return to Pakistan in a manner similar to Ishaq Dar. He said that when the PML-N leader returns to Pakistan, they would go to ‘welcome him and escort him to Adiala jail. Imran Khan also took aim at former president Asif Ali Zardari and said he should “get ready” for his arrival in Sindh – the traditional bastion of the PPP. Adding that the people of Sindh “need freedom the most”, Imran warned Zardari that he is “coming after” him in Sindh.

The PTI chairperson reiterated that the time of “true freedom” has arrived and told the march participants that “we will attain it through justice and will fight for the supremacy of law and justice”. “This system cannot continue and we will have to change it,” Imran said. “When it is asked who will save Pakistan, the answer is not Imran Khan. It will be you who will save Pakistan and set it free,” he told the people. Imran Khan demanded justice from Chief Justice of Pakistan for the torture inflicted on PTI leaders Shahbaz Gill and Azam Swati. “We will never forget it. The nation will never forget,” he said. “And what they did with Arshad Sharif […] he told me who was threatening him. Chief justice sahab you should take interest in this yourself. Arshad Sharif is first sent outside and then he is killed. I am asking you today. If you [CJP] and the judiciary don’t stand for us, then who will,” he asked. Reacting to RanaSanaullah’s rhetoric against him, Imran Khan warned the interior minister of “grave consequences.” “RanaSanaullah! Your time has come as well.” 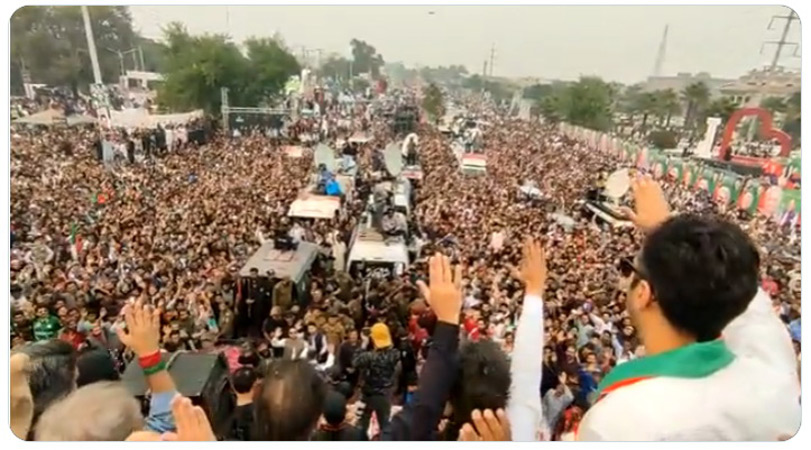 Urging the masses to join the PTI’s long march, Khan said, “Allah orders Jihad against thieves. The thieves were imposed on us under a foreign conspiracy. If we accept them just like sheep, then there is no future for us,” he said.

Referring to the statements of the ruling alliance, Khan said, “Rats are threatening us while sitting there (in Islamabad).” Khan maintained that he would give a call to all Pakistanis when he reaches Islamabad.

Addressing the marchers, Khan said let him clarify the difference between theft and corruption. “Whoever steals a watch, phone or is involved in the theft is a thief,” he said, adding that stealing a country’s money is also corruption. The big corrupts steal the country’s money and still wish to get an NRO,” he said, taking a jibe at PML-N supremo Nawaz Sharif. Firing broadsides at RanaSanaullah, PTI chief said that the PML-N leader’s “time has come now”. “There isn’t any more time left now. I know you are sweating now […] Sanaullah, you and Shehbaz Sharif […] These rats are threatening us. Listen to me, when we reach Islamabad […] listen to me Sanaullah […] when we reach Islamabad […] the police you are spending millions on will join us because they too are against thieves,” he said.

Imran Khan, in an address to supporters in Gujranwala, said that the city had broken “Lahore’s record today”. “Gujranwala, this time won’t come back. I want all of you to participate in this revolution. When I reach Islamabad, I will give a call to the entire country to reach Islamabad.”Imran said that his nation won’t bow down in front of anyone, nor would be scared of anyone.

Imran Khan alleged that news channels in Pakistan were being forced to stop their transmissions on the PTI’s long march towards Islamabad. “What are you scared of? This nation is aware now. The people have awakened now. No matter how much you try, you can’t bottle up the passion of these people. “We are coming to Islamabad for one reason: we want our haqeeqiazadi,” he said.