Imran should wait for Nawaz’s return to field 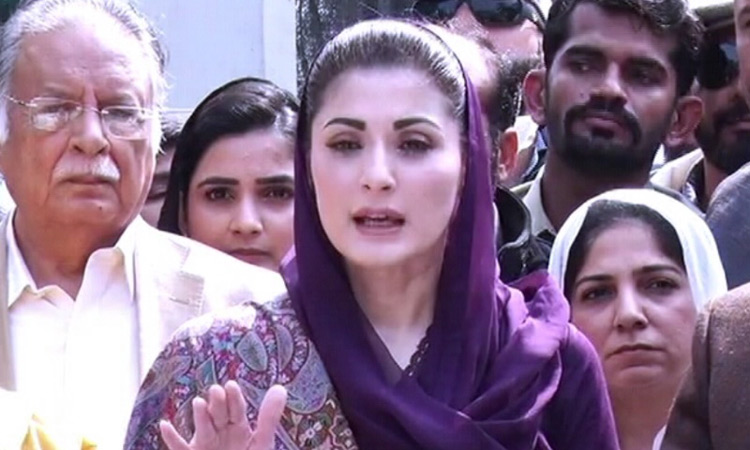 PML-N Vice President Maryam Nawaz on Tuesday censured Imran Khan for bragging about winning the by-elections and said that “he wins from constituencies which he himself vacates and then sings his own praise of winning the elections.” She dared Khan and said that he should wait for his biggest opponent – PML-N supremo Nawaz Sharif – who has “not yet been given a level-playing field”. “Khan’s actual level will be exposed on the day Nawaz will get a chance to step onto the electoral field,” she maintained, adding that the PML-N supremo will “Insha Allah return after ridding himself of all the baseless allegations Khan levelled against him.”

“And that day is not far away, because [when my case was being heard in the court] the judges clearly said that none of the allegations against Nawaz Sharif has been proven on the basis of which Maryam was convicted.”

“Even his party members, who he gathered from other parties including PML-N, PPP, etc., know that he is not a blue-eyed boy anymore. That’s why they are not part of the long march either.”

She said that the court should take notice of Khan’s statement as he is continuously lying about not being disqualified.

Maryam claimed that another big scandal will be exposed soon. “Pakistan had received a diamond set by Graff, one of the leading diamond-manufacturing companies in the world. Khan bought it from the Toshakhana for a price of Rs2 million but sold it off in Dubai for Rs22 million.”

Maryam further said that in total, Khan had looted up to Rs50 million from the Toshakhana, which is a property of the nation. “He will be exposed soon,” she said. “Khan is no longer a stakeholder in Pakistani politics”.

Maryam Nawaz, while refuting any negotiations or talks with the PTI, has said that former premier Imran Khan was no longer a “stakeholder” in Pakistani politics. “Their [the party’s] agenda is not democratic. A person who speaks about a bloody revolution has no link to democratic principles. He is a political terrorist and should not be listened to anymore,” she said.

Maryam also claimed that every political party, at one point time, has criticised the establishment but Imran’s reason behind it was not because of a vision but “to gain their support again”.

Maryam Nawaz said that Imran Khan’s long march to Islamabad “serves no purpose” and this was why the public had rejected it. “There aren’t as many people in the long march as there are in the Punjab police for Imran’s protection,” she claimed at a press conference in London. “For five days this long march is stuck in Lahore and yesterday we were hearing that it won’t reach Islamabad in 9-10 days. When you start at three in the afternoon and end at 6, you won’t reach Islamabad even in a month.”

She said the politics of Imran Khan had been rejected by the people who completely distanced themselves from his part time long march which failed to produce any result. “Imran Khan has played his last card by holding a part time long march, but it turns out to be a flop show as the nation has refused to defend his lies and false narrative of regime change conspiracy,” she said.

She said Imran Khan thought that he would succeed in removing the current government by holding a long march, but it did not happen.

The prime objective of long march was to prevent Prime Minister Shehbaz Sharif from appointing the new Army Chief, she said, adding the appointment would be made by the PM in line with constitution and law.

Maryam Nawaz said the march of Imran Khan had nothing to do with the people’s welfare, but aimed at creating chaos and anarchy in the country. She regretted the ruthless use of provincial resources in the long march by Imran Khan.

The PML-N leader said that he began the long march after exhausting his all his options. First, he held public gatherings to build false narrative of regime change conspiracy which he thought would help pressurize the government in getting a date for fresh election.

She said Imran Khan resorted to the long march when his first plan got failed and the people came to know about the reality of false narrative of regime change conspiracy. He thought that he would mislead the people with his lies but he was mistaken as the people had rejected his long march and lies, she added.

She criticized Imran Khan for launching verbal attack on the state institutions for political gains. His criticism of the Chief Election Commissioner was “deplorable”.

Maryam said the CEC had brought forth actual facts about the foreign funding received by Imran Khan. His crime had been exposed before the nation.

She said the false narratives of Imran Khan on different issues had been done and dusted after the recent presser of the Director General of ISI and the Director General ISPR. The PML-N leader regretted that Imran Khan’s criticism of state institutions was being highlighted in the media which was praising him for his “despicable” acts.

She said more cases of corruption of Imran Khan would surface soon and the nation would know as to how he ruthlessly looted the nation during his four year rule which was marred by corruption, unemployment, extreme inflation and wrong economic policies. She said that Imran Khan was a power hungry person and had nothing to do with the democratic norms and values.

Maryam said Imran Khan filed fabricated cases of corruption against her and Nawaz Sharif, but failed to produce single evidence in the court.