Shahroz Sabzwari hopes there will be no ill-will between him, Sadaf and Syra Yousuf as parents

* 'The best thing that happened to us is how much love God put in Nooreh's heart for Zahra,' Shahroz expressed 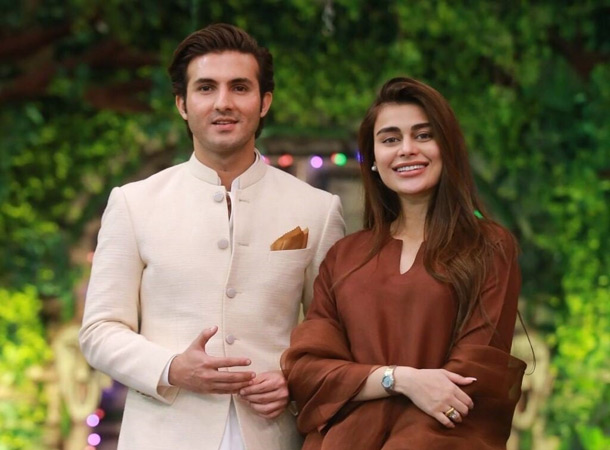 The half-sibling duo, Nooreh and Zahra, has been in a continuous spotlight on social media thanks to their wholesome bond with each other.

Recently, in an interview with Fuchsia Magazine, Shahroz Sabzwari and Sadaf Kanwal discussed Nooreh’s affectionate behaviour towards her little sister and how quickly she adjusted to the situation.

“The best thing that happened to us is how much love God put in Nooreh’s heart for Zahra,” Shahroz expressed. He then recalled the time before his newborn’s birth and how his family was prepared to handle any reaction from Nooreh, Shahroz’s first child from his marriage with Syra Yousuf. “From the first day, both of our families were ready that Nooreh could react to this anyway.”

“But by her eighth and ninth month of pregnancy, she started saying, ‘when is she coming?’ We didn’t know the gender of the child, but Nooreh kept saying it was a girl, and God heard her wishes: It was a girl,” Shahroz stated, as Sadaf nodded along in agreement.?The Dil Ruba actor then spilled details about Nooreh’s sisterly love. “She is so particular about her. Even if I pick Zahra awkwardly, she gets anxious.”?Shahroz then concluded his discussion by highlighting the peaceful relationship between all three parents and how his spouse is also okay with sending Zahra to his ex-wife’s house. He said, “When the kids here will grow up, they will also go to the other house, Sadaf has no problems.”Prior to this, in another interview with Fuchsia Magazine, Syra also talked about the necessity of keeping children out of familial disputes and not filling their innocent minds with negativity for others. “I don’t think children’s minds should be polluted, they are innocent and pure and that is how it should be.”?Sadaf has also expressed her love for Nooreh multiple times on social media.

In an Instagram video, Sadaf commented that family time is even “more fun when Nooreh comes.” The trio keeps receiving appreciation due to their maturity and healthy relationship with their children, regardless of the gossip that was fostered during Syra and Shahroz’s split.