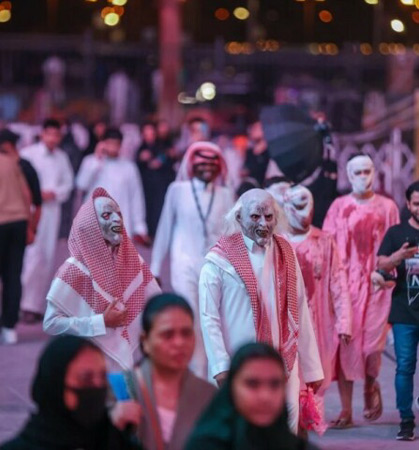 Saudi Arabia is the center of attention for the whole Muslim world due to the location of the two holiest Muslim sites, Madinah and Makkah.

Due to this, the nation has consistently had a key strategic place in the Islamic world and has also upheld a certain level of decorum throughout its 100-year existence.

But as the Kingdom’s new de facto ruler and Crown Prince Mohammad Bin Salman has pushed changes for the country’s modernization, things are unquestionably changing.

Initially, women were permitted to drive and work. After that the government permitted theatres, and now Saudi Arabia is celebrating Halloween for the first time ever.

At the Riyadh Boulevard, people emerged in costumes and were photographed.

People were horrified by the government-sponsored celebrations and Muslims around the world criticised them.

People believe that if a government prohibits the celebration of Eid Milad un Nabi yet allows Halloween on the roadways, then it has to alter its direction.