Frankie and girlfriend troll as Joe and Taylor Swift for Halloween 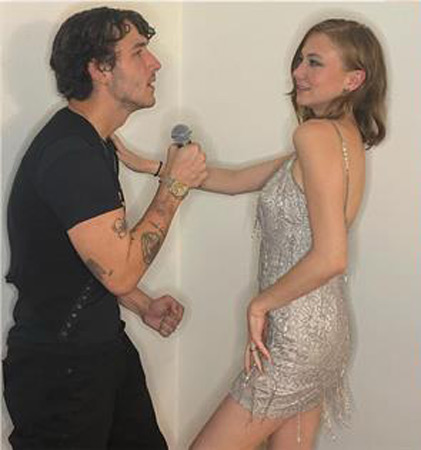 Well played, Frankie Jonas. The Jonas Brothers’ little bro just hilariously trolled one of his big bros for Halloween. On Oct. 30, Frankie, 22, shared on social media images of him and his girlfriend Anna Olson dressed up as Joe Jonas and ex Taylor Swift.

In one photo, posted on Instagram, Frankie and Anna, who have been dating for several months, reenact a scene of the former couple performing Taylor’s song “Should Have Said No” from the concert film Jonas Brothers: The 3D Concert Experience, which was filmed in 2008.

Also in his Instagram post, which their dad Paul Kevin Jonas liked, Frankie shared a closeup of two hands wearing what he wrote were “matching purity rings”-a nod to Joe’s jewelry of choice in the early days of his career.

Taylor, who has not been known to wear one, and the Jonas Brothers singer dated briefly from July to October 2008, after which he famously broke up with her over what she called a “27-second phone call.”

The two have since moved on with other partners-her with Joe Alwyn, him with wife Sophie Turner-and have even hung out a few times in recent years. In November 2021, Joe and the Game of Thrones actress came to support her as she performed music on Saturday Night Live and also joined her at the cast’s after-party.