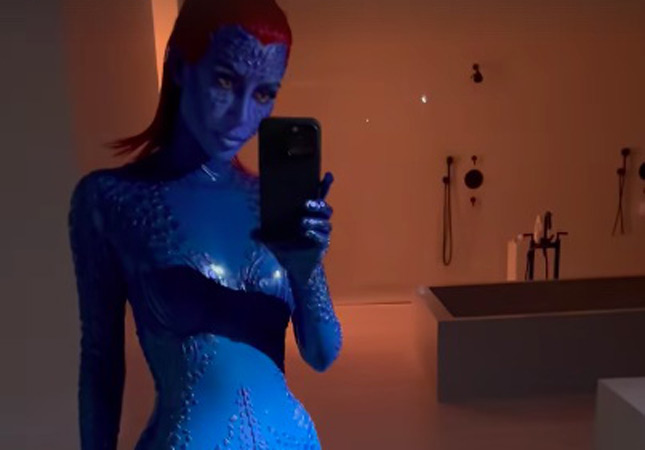 Kim Kardashian has transformed into a mutant for Halloween. On Oct. 29, the SKIMS founder attended Karrueche and Lenny S.’s party at TAO Los Angeles dressed head-to-toe as blue X-Men shape-shifter Mystique, who Jennifer Lawrence and Rebecca Romijn famously portrayed in the films based on the hit Marvel Comics superhero franchise.

In retrospect, Kim’s costume this year is on brand for her, seeing as she’s showcased a similar fashion style multiple times. For more than a year, she has often been spotted in public wearing sleek neck-to-toe catsuits, mostly from Balenciaga, with material that covers her hands and stiletto heels. In September 2021, the Kardashians star wore a full-length black outfit that covered her face to the Met Gala. The following October, she showcased a pink velvet catsuit while making her Saturday Night Live hosting debut before changing into a sleeker one for the after-party.

This past September, Kim stepped out during Milan Fashion Week sporting an embellished black catsuit from Dolce & Gabbana, with whom she collaborated on a spring/summer 2023 collection.