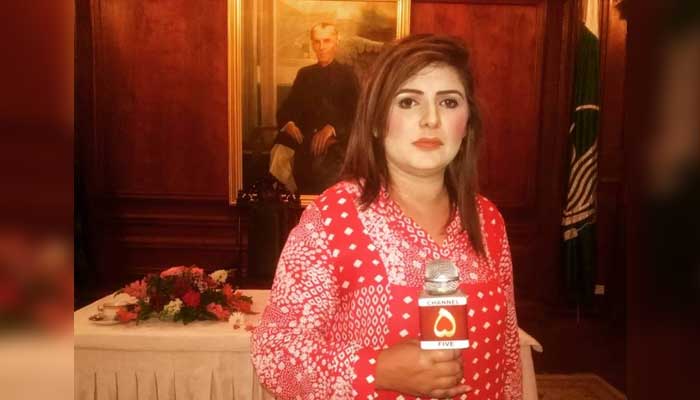 A video showing the moments before the heart-wrenching death of Channel 5 reporter Sadaf Naeem went viral.

Sadaf can be seen running after a container to get onto it. Later, she was crushed to death. Imran Khan came out of the container and announced a halt to the long march.

He said he cannot find words to express grief. As soon as the story made headlines, people from various walks of life expressed sorrow and grief over the sad demise.

Female reporter dies after being crushed under container during long march

Speaking to journalists, Sadaf’s husband Naeem said that his family found out about her death after their daughter saw her on television. The couple has a daughter and a son together aged 21 and 15, respectively.

“My daughter saw it on television and said she looked like her mother,” he said, adding that his children asked Sadaf to not go for reporting, but she refused.

Following the incident, the PTI Chairman Imran Khan announced stopping the march for the day and said it will continue tomorrow.

After the incident, the march was stopped at GT Road and Imran Khan stepped out of the container.

According to rescue officials, the reporter slipped and fell under Khan’s container while she was climbing down the one she was standing on already.

Prime Minister Shehbaz Sharif took to Twitter to share his grief over the incident and extended his condolences to the journalist’s family.

“Deeply saddened by the death of reporter Sadaf Naeem after falling from a long march container. Cannot feel sad enough over this tragic incident. Heartfelt condolences to the family. Sadaf Naeem was a dynamic and hardworking reporter. We pray for patience for the family of the deceased,” he tweeted.

PML-N Vice President Maryam Nawaz has also condemned the incident and prayed for Sadaf and her family.

“I am deeply saddened to hear about the loss of a precious life of a TV reporter Sadaf in the line of duty. My prayers for the bereaved family,” she wrote in her tweet, praying for the deceased to find eternal peace.

Punjab’s Chief Minister Chaudhry Pervaiz Elahi has regretted the incident and sent his heartfelt sympathies and condolences to Sadaf’s family.

“I’ve seldom seen reporters as courageous and hard-working as Sadaf. A brave girl. Her eyes lit up after I introduced her to Imran Khan as the bravest and most hard-working reporter. Who knew that the meeting will be the last one. May God have mercy on her,” Fawad wrote in his tweet.