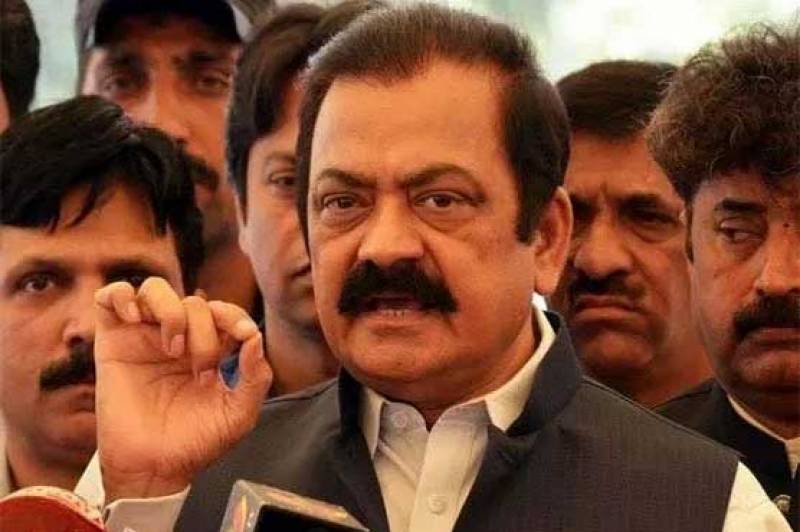 Interior Minister Rana Sanaullah Sunday said the government hasn’t decided whether to let the long march enter Islamabad or not.

Speaking during some tv show, Sanaullah said: “It has not yet been decided whether to allow them entry into Islamabad. They would be allowed to enter if they ensure a peaceful protest.”

The interior minister shared that the government has expanded the boundaries of the Red Zone and the PTI would be allowed to enter the capital if they ensure their protest would take place according to the court’s decision.

Commenting on the audio conversation between PTI leader Ali Amin Gandapur and a man named Asad Khan on bringing ammunition to the long march, Sanaullah said: “They should not be allowed to enter Islamabad based on the audio that surfaced yesterday.”

A day ago, the minister shared a purported leaked audio of Ali Amin Gandapur, who could be heard speaking about bringing arms for the long march which, according to Sanaullah, was PTI Chairman Imran Khan’s plan to spread chaos in the capital.

“Some people are wanted. Once they are found, their intentions will be revealed through interrogation,” the minister told.

Speaking about the negotiation offer by the PTI chief and party leaders, Sanaullah said that Khan sent the message to talk about the election date and the army chief’s appointment.

“Prime Minister Shehbaz Sharif did not accept Imran Khan’s suggestion,” he shared, adding that Pervez Khattak and Fawad Chaudhry also contacted [the government] for a similar discussion a few days back.

“Four to five days ago, Fawad Chaudhry said let’s sit down and talk. He was insisting for the election to be held from March to April, we are suggesting October,” the minister said sharing details about the PTI’s offer for talk.

“We asked them not to lay bets, but talks can be held unconditionally,” Sanaullah informed.

The minister added that PTI is divided into two factions.

“One faction supports the insanity, while the other somehow want a way out,” he shared underlining Khan’s inflexibility to talk with the Opposition.

Sanaullah said that politicians lead toward dialogue to resolve issues.

Commenting on Khan’s insistence on the two crucial matters including the army chief’s appointment, Sanaullah said that his party’s position has always been that of no interference in politics.

Speaking during some tv show, Sanaullah said: “It has not yet been decided whether to allow them entry into Islamabad. They would be allowed to enter if they ensure a peaceful protest.”

“We wanted to talk to them about not interfering, he said and added that Khan’s politics pushes interference for his own sake.

Commenting on the alleged threats to Arshad Sharif, Sanaullah said that the threat alert was issued upon request.

“Imran Khan had the Khyber Pakhtunkhwa Chief Minister issue the threat alert,” he claimed to add that none of the journalists who have fled the country so far has reported any threat.