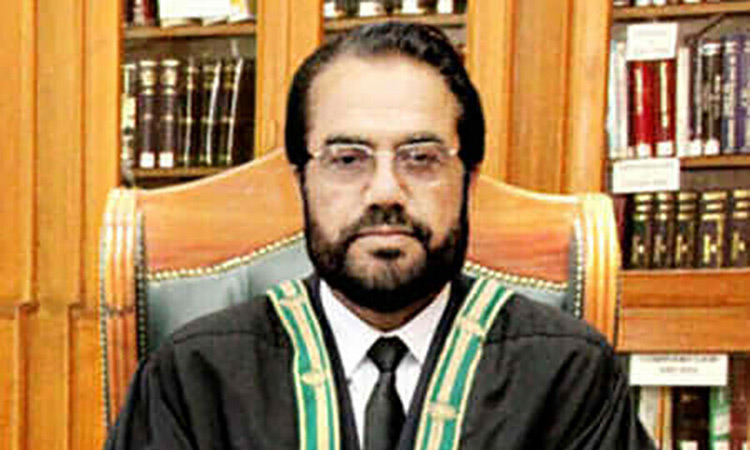 Police on Saturday claimed to have arrested the alleged killer of former chief justice Balochistan High Court and Federal Shariat Court Justice (Retd) Mohammad Noor Maskanzai along with another accused.

Justice Maskanzai was assassinated on October 14 in his hometown Kharan when he was offering evening prayers in the mosque. Insurgent group, Balochistan Liberation Army (BLA) had claimed responsibility of the murder.

Atizaz Gorayia said the joint investigation team, which was deputed for investigation, had visited the crime scene, while it’s geo-fencing and collected evidence helped them reach up to the accused. Shafqat Ullah Yalanzai and his companion Abdul Rahim Yalanzai were arrested from Kharan area and arms and ammunition was also recovered from their possession, he added.

Counter Terrorism Department Police, he said, arrested 666 suspects during the last year. He said that 121 accused were sent to jail by the courts, 36 were released on bail while 158 were absconding. He said that the courts have acquitted some accused arrested by CTD. “Many personnel of CTD lost their lives and many others injured during different operations against terrorists organizations,” he said, adding that the suspects killed in Kharan operation were involved in terrorist acts and CTD had seized 12 mortar shells of 82 mm. He denied the existence of ISIS camps in Balochistan but said that the presence of such militants could not be ruled out.

Meskanzai was fatally shot outside a mosque in Balochistan’s Kharan area. Kharan Superintendent of Police Asif Halim had said that unidentified assailants opened fire at him outside the mosque, which left Maskanzai gravely injured. He was taken to a nearby hospital, where he died of his injuries.

A profile of Meskanzai on the Balochistan High Court Justice’s website said he was born on the 1st of September 1956, at Kunri, District Kharan. Justice Meskanzai started his legal practice in September 1981, at Quetta.

He was appointed as assistant advocate general Balochistan and worked on the seat from June to December, 1998. He was elected as Vice Chairman of the Balochistan Bar Council from the 24th of March 2005 to 24thof March, 2006.

Justice Meskanzai took oath as chief justice of the High Court of Balochistan on December 26, 2014.

He later became the chief justice of the Federal Shariat Court, and authored the landmark judgement that declared the Riba-based banking system against the Sharia.