Inside Julia Roberts’ busy, blissful family world as a mom of three teenagers 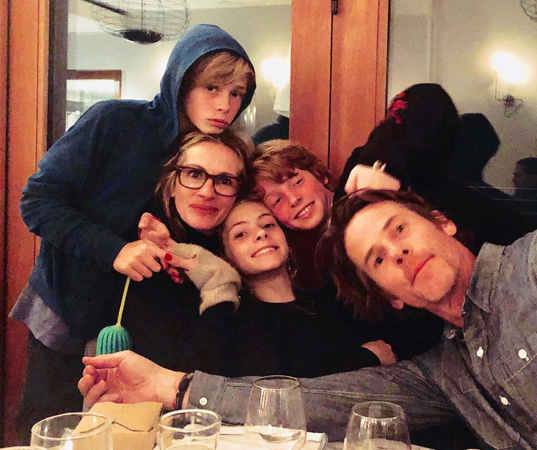 It’s no secret that Julia Roberts put acting on the back burner the minute she became a mom almost 18 years ago.

Of course, even Roberts’ back burner was the stuff Hollywood dreams are made of. But there was no point following the birth of her twins, Hazel and Phinnaeus, on Nov. 28, 2004, at which her children were not at the center of her universe. “By the time we had kids, I had accomplished things and felt secure about that part of my life,” the Oscar winner told the Wall Street Journal in 2014, the “we” being she and cinematographer husband Danny Moder. “I was so joyful moving into the family phase of my life in a sincere way.”

In fact, “for a long time,” she continued, the kids “weren’t even aware that I had a job because I was home so much.”

The late Mike Nichols, who directed Roberts in 2004’s Closer and 2007’s Charlie Wilson’s War, attested to her starring role as Mom, telling the Wall Street Journal, “That’s what Julia has been best at, maintaining their real life. It’s the little things that tell the tale. When you visit them, there is nobody working at their house, sweeping their hall. There are toys all over, and it’s just Julia and Danny and the kids. She always slips away from the center.” Acknowledging that taking a step back from work to focus solely on motherhood was an “incredible luxury,” Roberts told Gwyneth Paltrow on The goop Podcast in October 2018 that she had felt, after 18 extremely busy, lucrative years of making movies, that “I had earned that time to do whatever I want to do with it, with these new people in our house.”

Her kids got wind of what she did for a living eventually-but even so, if you didn’t witness the Pretty Woman, Notting Hill or Erin Brockovich days firsthand, the storied nature of her career might have been hard to grasp. “I don’t think they will ever have a true sense of that,” Roberts, who turns 55 on Oct. 28, acknowledged to Oprah Winfrey in a sit-down with the media mogul for Harper’s Bazaar in 2018. “I think I told you once when they were starting to figure it out, it was like, ‘You’re famous?’ And I said, ‘I think a lot of people might have seen the movie that I’m in or might know who I am.”‘

Roberts recalled that the kids chewed on that for about an hour, before asking her, “Are you more famous than Taylor Swift?”

Kids really do say the darndest things. And we’re guessing their minds were pretty blown when Roberts took them to Swift’s 1989 Tour in 2015 and their mother was invited to share the stage with the headliner.

Not that Hazel, Finn and their brother Henry, born June 18, 2007, didn’t have a variety of clues starting from a young age that their parents didn’t have typical 9-to-5s, whether it was all the travel or playing on film sets and in Broadway theater dressing rooms or having the occasional Oscar winner (aside from their mom) stop by their house in Malibu, where they’ve lived since they became a family of five. “We’re just grateful for the sense we have of being like any other family down the street,” Roberts told the WSJ. “I don’t question it, frankly.” Unlike their neighbors, though (or, maybe just like them, Malibu being a pretty nice place), they have a few other homes as well, including the 30-acre ranch near Taos, N.M, where Roberts and Moder tied the knot on July 4, 2002, and where the actress historically loved spending as much time as possible. But since the kids go to school in Southern California, that is where the majority of the magic-the family meals, the holiday baking, the mah-jongg with friends, knitting and needlepoint, birthday parties, soccer games, surfing and skateboarding-takes place.

“There are some days when as soon as you’ve finished cooking breakfast and cleaning up the kitchen it’s time to start lunch and by the time you’ve done that you’re doing dinner and thinking there has to be a menu we can order from,” Roberts told the U.K.’s Telegraph in 2009. “But then there are some days when it’s just so creative and so much fun and my kids will help me and, as with anybody who’s a mom or a wife, it just become a part of your day. Some days it’s super-fun and some days it’s a chore.”

And while the kids got steadily bigger, certain things didn’t change, other than to become even more important to Roberts as a mom. Eating together is “really meaningful, and that is the time that we have had some incredible conversations,” Roberts told InStyle in 2017. “I usually have breakfast and dinner with my kids every day. I think it really punctuates, you know, starting things together and sort of processing and winding it down together.” They’re good eaters too: The actress told E! News that Finn actually enjoyed salmon with brown rice and she hadn’t had any problem getting her brood to eat their greens. “I don’t think I ate a proper salad until I was maybe 20-which I don’t share with them,” Roberts noted. She partially attributed their non-fussy palettes to all the traveling they do-“when you travel you have to eat what you’re kind of given”-but at the same time, their mom happens to be a really good cook.

And though Roberts also logged time as the highest-paid actress in Hollywood, her kids are getting the full regular-mom treatment at home. “My husband and I are very aligned on that front and I think that we live a very normal experience with our children,” Roberts explained on ITV’s Lorraine in 2019.