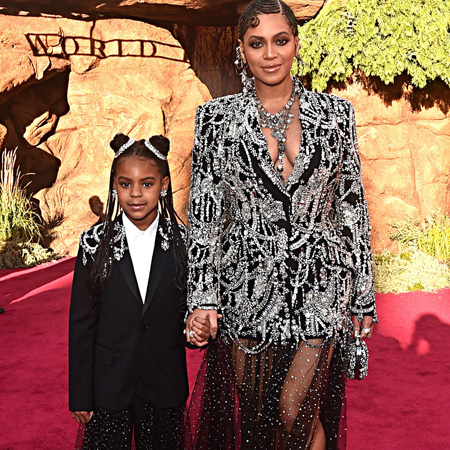 You won’t break Blue Ivy’s soul when she’s wearing an outfit like this. Beyoncé shared photos of her and Jay-Z’s 10-year-old daughter accompanying them at the Wearable Art Gala on Oct. 22, and Blue showed everyone up in her matching blue suit.

Blue’s look also composed of patent black gloves and a crystal silver bag. For her glam, Blue leaned into the blue hues and wore a stunning blue winged eyeliner.

Her parents, on the other hand, looked just as posh with the “Renaissance” singer wearing a custom Gucci mermaid gown with stars embellished at the bust and pink gloves. Although Jay-Z let the women in his life have their moment, his look was just as great with a velvet black suit, a matching bow-tie, slacks and dress shoes.

In the family photo, the trio are joined by Beyonce’s mom Tina Knowles as they all give their fiercest look at the camera.

The Grammy winner has already proven herself to be fascinated by all things art and fashion.

At the event, Blue went viral for placing a bid of over $80,000 on a pair of Lorraine Schwartz diamond earrings that her grandmother, who organized the event, was wearing.

Unfortunately for Blue, she was out-bidded by the founder of Mielle Organics Monique Rodriguez and husband Melvin, whose winning bid was $105,000.

The family’s night out featured some other familiar A-listers, including Lupita Nyong’o, Tyler Perry, Magic Johnson, Angela Bassett and Chloe and Halle Bailey and more. She might just be 10 years old, but it should come as no surprise that Blue is already taking after her fashion-icon mom.