Tom Brady and Gisele announce divorce after 13 years of marriage 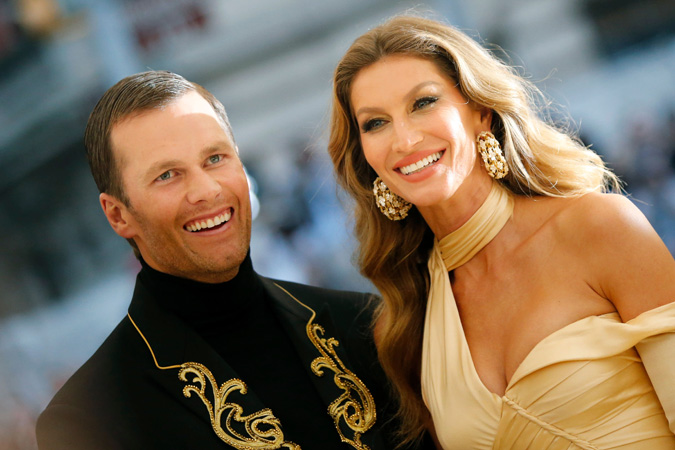 Tom Brady and Gisele Bündchen’s marriage has entered the end zone. The NFL star and the supermodel-who have been married for 13 years after tying the knot back in 2009-are officially parting ways, Tom and Gisele both confirmed on social media Oct. 28, noting that they’ve recently finalized their divorce.

“We arrived at this decision amicably and with gratitude for the time we spent together,” Tom, who shares kids Benjamin, 12, and Vivian, 9, with Gisele, wrote in his Instagram Story message. “We are blessed with beautiful and wonderful children who will continue to be the center of our world in every way. We will continue to work together as parents to always ensure they receive the love and attention they deserve.”

The athlete noted that he and Gisele also arrived at the decision to part ways after much consideration. “Doing so is, of course, painful and difficult, like it is for many people who go through the same thing every day around the world,” he continued. “However we wish only the best for each other as we pursue whatever new chapters in our lives that are yet to be written.”

News of their breakup comes after an E! News source confirmed in early October that the pair each obtained New York-based divorce attorneys amid ongoing speculation of their split.

“There has always been a lot of love and passion between them,” the source shared. “But now that they have been apart, it seems like this is better for everyone.”

As for what has caused a rift between the two, the second source shared that Tom’s career return played a factor. “The root of the problem is his unavailability during football season,” the second source said. “She wants things done a certain way. They have had problems for years and this is a recurring theme.”

Tom originally announced that he was retiring from the NFL back in February. But one month later, the 45-year-old-who also shares son Jack, 15, with ex Bridget Moynahan-proved he wasn’t ready to close that chapter just yet. On March 13, Tom announced that he would be returning for his 23rd season.

But despite signing on to play, Tom was absent from practices with the team in August. Coach Todd Bowles explained in a press conference at the time that Tom was excused “to deal with some personal things,” according to People. The coach added that this was discussed between them before training camp kicked off.

After being off the field for 11 days, Tom discussed what went down during his break.

“Everyone has different situations they’re dealing with, and we all have unique challenges to our lives,” Tom told reporters after a preseason game, per the outlet. “I’m 45 years old, man. There’s a lot going on, so you just have to try and figure out life the best you can.”

He added, “You know, it’s a continuous process.”

Since then, Gisele became more vocal about her feelings on Tom’s return to the field.

“I have my concerns,” she shared in an interview with Elle published Sept. 13. “This is a very violent sport and I have my children and I would like him to be more present.”

Aside from her wishes for Tom, Gisele also shared the goals she has for herself. “I have a huge list of things that I have to do,” she told the outlet, “that I want to do.”

Reflecting on the past years, the model noted that she has made choices for her home life.

“I’ve done my part, which is be there for [Tom],” she said. “I moved to Boston and I focused on creating a cocoon and a loving environment for my children to grow up in and to be there supporting him and his dreams.”

And it’s safe to say those decisions did not go unnoticed by the Tampa Bay Buccaneers quarterback.

During an exclusive June interview with E! News Daily Pop, Tom touched on Gisele’s support, saying, “It really allows me to go out and do what I love do.”

“I think football is a big commitment, that’s the most challenging part…It’s a big commitment for her,” he shared at the time. “She takes a lot on for our family and she does an unbelievable job of prioritizing our kids and making sure all their needs are met.”

Tom and Gisele first met back in 2006. According to Brides, it was thanks to a mutual friend that the pair crossed paths.

But it wasn’t all clear skies: Just two months into their romance, Gisele’s “world turned upside down” when news broke that Tom’s ex Bridget was pregnant with their son Jack, per Gisele’s memoir Lessons. Despite the surprise, Gisele said Jack’s arrival in August 2007 made her heart “expand in ways I didn’t know was possible.”

Since then, they welcomed son Benjamin in 2009 and daughter Vivian in 2012. As their romance evolved into an expanded family, Tom reflected on the constant evolving state of a relationship.

“Everyone who’s been married or been together for long periods of time, you grow and you find different ways to grow together,” Tom exclusively told E! News back in 2016. “And I think it’s just always being conscious of what both people are looking for in a relationship, and fulfilling each other’s needs and supporting each other, and growing and loving each other in different ways.”