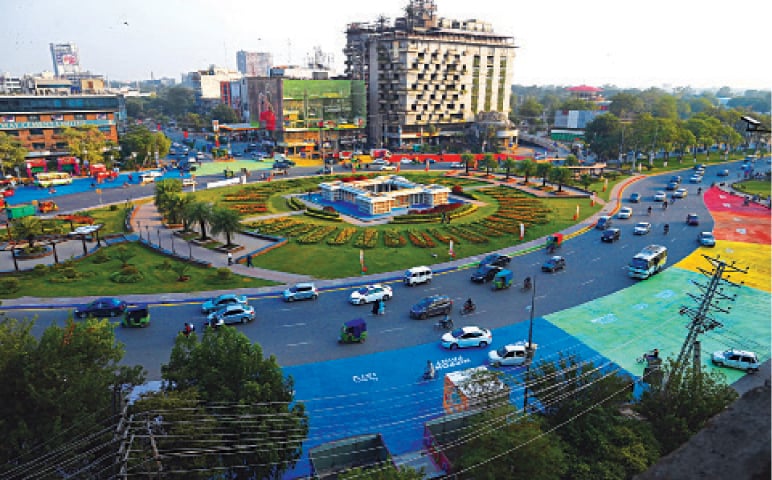 On Friday, Pakistan Tehreek-i-Insaf participants in the long march began crowding at Liberty Chowk in Lahore.

The PTI long march is set to begin at 11 a.m. today at Liberty Chowk, but party activists have already begun to crowd the area.

Workers for the PTI are holding party flags and wearing dresses with party flag colors. The PTI march participants will be gathered at a reception camp set up at the Liberty Chowk. Rallies from across the city would join the main procession before beginning their march to other cities.

The marchers will begin at Liberty Chowk and proceed through Ferozepur Road, Ichhra, Mozang, Data Darbar, and Azadi Chowk. And the marchers will hit GT Road tomorrow (Saturday) to begin their journey towards Islamabad.

During a press conference on Tuesday, former prime minister and PTI Chief Imran Khan said that his scheduled march on the capital, Islamabad, starting Friday could trigger a “soft revolution” in the country through the ballot box and warned of chaos if authorities try to block the protest.

“We will gather at Liberty Chowk at 11 am on Friday, and set off for Islamabad,” he told a hurriedly called press conference. “This is our march for haqeeqi azaadi and it has no timeframe,” he added.

Since his government’s removal in April through a no-confidence vote in parliament this year, Imran is demanding fresh elections.

The PTI is starting its march from Lahore, Punjab where it runs the provincial government along with its ally – PML-Q.

The PTI’s caravan will make stopovers at different towns and cities on its way to the federal capital.

On the other hand, participants of the march from Quetta and Karachi will also leave for Islamabad today, while those from Multan, other parts of southern Punjab, and Khyber Pakhtunkhwa (KP) will leave on Wednesday (November 2, 2022).

All PTI caravans will reach the federal capital next Friday (November 4, 2022).

On Thursday, CCPO Lahore Ghulam Mehmood Dogar chaired a high-level meeting to provide security to the people of the city during the PTI’s long march. It was decided that total 9, 000 police personnel would be deployed in the city on the occasion.

On the other hand, Interior Minister Rana Sanaullah said on Thursday that the long march of Pakistan Tehreek-e-Insaf (PTI) would not be allowed to enter the Red Zone in Islamabad at any cost. The government would deploy the army under Article 245 of the Constitution and the marching protesters would be contained at all the entry points to the capital.

Meanwhile, owners of private schools around Liberty Chowk have shut down their institutions and also informed the parents about their decision.

However, EDO Lahore has announced that the government schools will remain open.