After listening to ‘Moonrise’, fans think Atif Aslam is the king of all genres

* Directed by Adnan Qazi and produced by Tarun Chaudhary and Omer Ahmad, the concept is simple 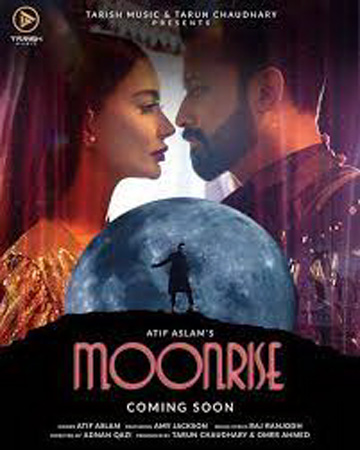 Aadeez, the countdown is over – the music video for Atif Aslam’s new Punjabi song ‘Moonrise’ starring Bollywood star Amy Jackson is out now.

On Thursday, he shared a tiny montage clip on Instagram captioned, “Hope it makes you feel over the moon. ‘Moonrise’ music video out now on YouTube.” Tarish Music posted the video, dedicating it to “lovers who love to the moon and beyond”.

Directed by Adnan Qazi and produced by Tarun Chaudhary and Omer Ahmad, the concept is simple. Guy likes girl, guy pours out his affection in a musical tribute trying to capture her beauty. Women in sparkly dresses, chandeliers and disco balls hanging from the ceiling, people dancing as a band plays and Aslam’s gaze not straying from his lover for a second. The setting is very nightclub-y with mostly blue colour grading as light flashes periodically on the singer and on Jackson.

Though the title of the song is not uttered in the song, the ‘Dil Diyan Gallan’ singer describes his lover’s face to the rising moon in Punjabi i.e. tera mukhda, jive ni chann charda aa.

It has been a little over an hour since the release of the song and fans are already crowding the comment section to let the “king” know his voice can “fit in any genre”. Even fans from India are sending their love to the singer.